Cold War is a historical period drama directed by Paweł Pawlikowski, who co-wrote the screenplay with Janusz Głowacki and Piotr Borkowski. It is an international co-production by producers in Poland, France and the United Kingdom. Cold War follows a musical director who discovers and falls in love with a young singer. Their love story is explored over the years and is loosely inspired by the lives of Pawlikowski’s parents. I waited for some time to see Cold War. I found it was worth the wait.

Cold War opens in 1949 post-war Poland, with Wiktor (Tomasz Kot), a musical director who also plays piano and Irena (Agata Kulesza), a strict ethnomusicologist, colleague and producer conducting auditions for a state-sponsored folk music ensemble. Wiktor’s attention is immediately captured by Zula (Joanna Kulig), an ambitious and captivating young woman who is faking a peasant identity and is on probation after attacking her abusive father. Wiktor and Zula quickly fall into a deep, obsessive attraction with each other, which leads to the two of them having sex at the end of a performance. Later, Wiktor and Irena are pressured by bureaucrats to include pro-Communist and Stalinist propaganda in their performances. Giving in to the bureaucrats would allow the troupe to tour the eastern bloc, however Wiktor and Irena are opposed to the changes, but the career-driven, opportunistic and  supervising party official,  Kaczmarek (Borys Szyc) agrees to the additions, so a resentful Irena quits. Kaczmarek is also interested in Zula and pressures her into spying on Wiktor for him, but Zula refuses to tell him any incriminating information. When the ensemble visits Berlin, Wiktor plans to flee to the west with Zula, as they affirm their love and passion. As Wiktor waits for hours at the designated rendezvous, Zula fails to show up, so he crosses the border alone.

Years later, Zula meets Wiktor in Paris, where he is working at a jazz club. Though they both have other partners, their continued mutual attraction is clear. When Wiktor asks Zula why she failed to appear with him to cross the border, she said she lacked confidence in herself. A year later, Wiktor attends one of the troupe’s performances in Yugoslavia, where Zula spots him in the audience and becomes visibly shaken. Two years later, Wiktor is working in Paris as a film score composer, where Zula reunites with him; she has married another man to obtain a visa and be with Wiktor.

Cold War is a roller coaster tale of two lovers caught between a communist government and freedom in France.  The movie spans across Poland, Paris, Yugoslavia and Berlin.  There’s enough jealousy, mystery, unexplained love choices, bad decisions and danger to keep one guessing throughout the movie.  Cold War is a different kind of love story that flip flops between the future and the beyond.  The ending is unpredictable and the whole damn film is a very sad, depressing story that has you leaving unhappy about the whole thing.  However, the acting is brilliant.  Cold War is still a solid film that’s worth seeing. The only downside is that it’s in a foreign language with English subtitles.  Cold War is now on DVD and Blu-Ray.  Check It Out! 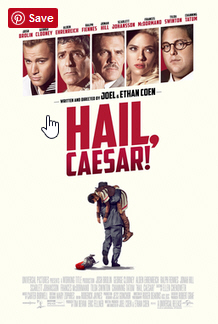 Hail Caesar! has a lot going on. Considered a comedy/satire, it takes place in 1950s when Hollywood was having a rough time because of television as a major competition and the McCathy Era (aka the Cold War era). Directed by the Coen Brothers (Joel and Ethan), known for their wacky, satire films, certainly live up to their reputations for this one. In Hail Caesar!, they try to follow the real life of Eddie Mannix (James Brolin) who is known as “the Fixer” of the film industry. There are several plots which makes the focus a just little difficult.

Eddie has a growing amount of problems that need his attention. Since Eddie works for the production studio, which is in the throws of producing Hail Caesar!, he must get these problems resolved as soon as possible. Actress, Deeanna Morgan (Scarlett Johansson) is pregnant and single. Eddie is resolving her potential scandal by having her adopt her own baby without revealing herself as the biological mother. Braid Whitlock (George Clooney) is starring in the studio’s epic film, Hail Caesar!. Someone drugs and kidnaps him, then sends a ransom note demanding $100,000 dollars for his release, signed by “the Future”. Eddie plans to use the studio’s petty cash to pay them off. Thora and Thessaly Thacker (Tilda Swinton) are twin sisters who have rival gossip columns. They are a constant threat, as they are always hanging around looking for the latest scoop and don’t mind playing dirty to out-do one another or to get the information they want. Currently, Thora is holding info about Whitlock that she plans to release but Eddie is able to hold her off with a promise to give her info on another actor/singer Hobie Doyle (Alden Ehrenreich), who is cast in a drama directed by Laurence Laurentz (Ralph Fiennes). Recently, Laurence has informed Eddie that Hobie’s acting abilities are sub par and he want him replaced but Eddie has convinced Laurence to take Hobie under his wing and make him a better actor.

There are more problems for Eddie and many more stars in Hail Caesar! You can see why it’s a little hard to stay focused. You can get all the plots and answers on DVD/Blu-Ray, if you like this kind of satire and/or the Coen Brothers. I think it’s an okay film to rent!