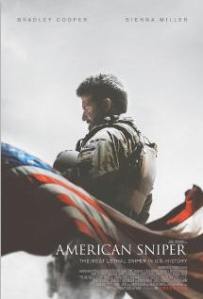 American Sniper is a true story based on the life of Chris Kyle, played by Bradley Cooper. This movie was excellent. The academy of Arts and Science has their work cut out for them this year. There’s much to learn from this movie. Imagine having to assassinate terrorist in war time. Whether it’s a child, woman or man, as a sniper you are required to take the subject out immediately before they take out our soldiers. Chris was a cowboy who preformed in rodeos with his brother before deciding to become a Navy Seal Sniper.  Taught by his dad to shoot, he had a gift, as he was able to shoot with pinpoint accuracy.  Chris encountered many situations while in Iraq.  By the time he got out of the service he was mentally affected by the experience.  He worked long and hard to overcome his problems and get back to his wife and son.  There’s lots of action depicting the battles fought in the war.  Chris was the center of everything and earned the title of “The Legend”.  He saved hundreds of lives and killed hundreds of terrorist in action.  American Sniper is riveting and emotional and well directed. 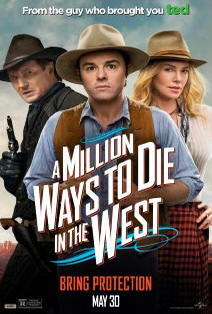 A Million Ways to Die in the West is one of the funniest movie to hit the theaters since “The Wedding Crashers”.  I genuinely laughed my head off.  I grant you, the entire movie wasn’t rip roaring funny but the many scenes that were funny, were really funny.  A dorky sheep farmer/cowboy (Albert played by Seth MacFarlane) who is cowardly and afraid to defend himself in any gunfight, is in love with a society seeker who eventually breaks up with him.  She (Louise played by Amanda Seyfried) moves on immediately to a semi-quasi wealthy owner of a local store (Foy played by Neil Patrick Harris).  In the meanwhile, Albert meets the wife (Anna played by Charlez Theron) of the fastest gun in the west (Clinch played by Liam Neeson) and they fall in love.  Of course I can’t reveal what happens but you’re in for some good entertainment.  Since this is a comedy, anything I say will give away what makes this movie so great so I will just say “check this one out”  it’s worth the time and money. 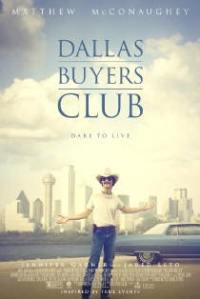 Nicely told.  Dallas Buyers Club is about a partying, drinking, drugging, gambling,  sex addicted cowboy who tested positive for AIDS.  Back in the 80’s the stigma was awful and information limited.  ATZ was the popular treatment, which actually did more harm than good.   Watching this cowboy’s life unfold was pure genius.  Matthew McConaughey portrayed this HIV positive cowboy brilliantly.  I didn’t know what to expect from this movie, especially since I had no idea what it was about.  I was schooled on so many levels and found myself extremely emotional due to his plight and the plight of many others who are going through living with this horrific decease.  I think Dallas Buyers Club is a must see film.  I won’t say it’s entertaining, given the subject matter but I will say it’s intense and informative.  Dallas Buyers Club is most defiantly worthy of an Oscar, I say check this one out!