Criminal really fell way under the radar. I was so impressed with Kevin Costner’s performance as Jericho Stewart, a criminal with no morals. This is Costner as I have never seen him before. Even his voice changed. If you didn’t know it before, you will know now if you see Criminal, Kevin can act his tuchis off! Criminal is about an anarchist, Xavier Heimbahl (Jordi Mollà) who instructs his associate, who is also a hacker known as “The Dutchman” (Jan Stroop) to create a wormhole program that would allow it’s owner access to the world’s nuclear defense codes by bypassing all computer codes via this wormhole. After following Xavier’s orders, the Dutchman panics and attempts to make a deal for $12M with Bill Pope (Kevin Reynolds) a London based CIA agent who secures the money and hides the Dutchman in an undisclosed safe house. Xavier catches Bill, tortures him and leaves him for dead without finding where the money or the Dutchman is being held. In the meanwhile, Bill’s supervisor, CIA Chief Quaker Wells (Gary Oldman) is desperate to find the money and the Dutchman before the Russian, Xavier Heimbahl does. Quaker consults Neuroscientist Dr. Mahal Franks (Tommy Lee Jones) who has developed a treatment that could theoretically plant the memory patterns of a dead man onto a living one. Keeping Pope’s brain stimulated to preserve its knowledge, Dr. Franks requests that convict Jericho Stewart be the subject of the procedure, as Stewart’s criminal behavior is the result of childhood brain trauma, leaving him with an underdeveloped frontal lobe, hindering his emotional development and impulse control, that they can use to ‘graft’ Pope’s knowledge into Stewart’s mind.

Of course there’s lots more to this story and as I said, Kevin Costner really gives a solid performance.  Gal Gadot plays Bill Pope’s wife who encounters the deadly Jericho who is beginning to remember what’s in Bill’s head.  There are some great and funny scenes, as Jericho rocks Criminal with his lack of ethics, morals and compassion.  Criminal is definitely worth seeing.  I, for one, was really entertained and enjoyed the movie.  The ending was truly worth the entire film. 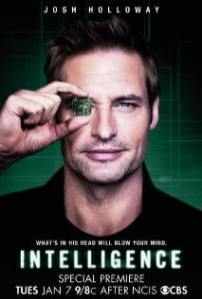 CBS has a winner in Intelligence.  This is a story about a  high-tech intelligence operative named Gabriel Vaughn (played by Josh Holloway, formerly of Lost) who has a rare generic make-up that accepted a super microchip placed in his brain without repercussions.  Instead of building an android, this chip sort of brings the android to the human. This means Gabriel can perform with the intelligence of an android but is still a human being.  From a physical perspective, he is not super human so he needs a sort of body guard, Riley Neal (played by Meghan Ory) to insure his safety.  Gabriel can access and alter almost any data base in existence, i.e., while listening to a criminal telling him that his name is John Doe and lives in Miami, Gabriel can use face recognition to scan John Doe’s face, get his real name and address fast enough to answer John Doe with the facts.  This can take place in less than 30 seconds.  He can also alter stop lights, locked doors, electrical parts on cars and much, much more.  Gabriel was a former decorated soldier who is now part of an elite government cyber-security agency who got into this because of his missing, presumed dead wife.  The series is pretty suspenseful, interesting and entertaining.

I will start by admitting I am a stanch James Spader fan.  Having said that, I must further say The Black List is an outstanding series.  Of course James Spader is what makes The Black List so special — his unique acting abilities and deliverance is simply brilliant.  The story revolves around  Raymond ‘Red’ Reddington (Spader) who is on the FBI’s 10 most wanted list.  One day he gives himself up to the FBI and then makes a bazaar offer to help them capture the 10 most notorious criminals in the world.  There’s only one catch, that he has complete freedom to move about as he sees fit and he only works through FBI agent,  Elizabeth Keen (Megan Boone).  No one knows why he picked this particular agent since she’s not as seasoned as some of her fellow agents but suspicions are flying.  This drama is well written and well thought out.  Each week Red delivers and so does the Black List.  Very interesting.  I’ve been told The Black List is the #1 show on TV.  I share in the feeling that it deserves to be there.