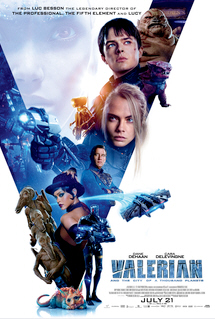 Since I don’t read comic books, I didn’t know what to expect or even that this movie was derived from a comic book series. The pitch was “Valerian is the most beautiful movie we’ll ever see.” It was compared to Avatar and I was convinced that if it was half as good as Avatar, it still would be pretty fantastic as far as outstanding special effects goes. As it turns out, some of this was right but not all. It wasn’t until two thirds through, I found Valerian becoming more than tolerable and even interesting. The acting was good but the story was a little confusing. Then something happened; camera, action, a change of pace — oh boy, I think I like this after all.

A space station called Alpha was started in the 28th century where millions of creatures from different planets could live peacefully, exchange knowledge and cultures without any problems. What began as a space station around the planet Earth, grew as many nations from Earth and races from other planets joined. One of the planets called Mül was a low-tech humanoid race that lives peacefully in a tropical paradise. They fish for energy-containing pearls and use certain animals to duplicate the pearls.  Their philosophy was to give back what was given to them, much like Luke 12:48 – (NLT) “When someone has been given much, much will be required in return; and when someone has been entrusted with much, even more will be required.”

Major Valerian (Dane DeHaan) and Sergeant Laureline (Cara Delevingne) are romantically involved as well as special agents of the human police forces. In a dream, Valerian sees this planet in all it’s beauty and glory.  As this idyll is destroyed by spaceship debris crashing onto the planet, Valerian wakes up to find he and Laureline on a mission to retrieve one of the rare animals from his dream, called a “converter”, from a black market dealer.

Valerian interrupts a meeting of the dealer with two prospective customers for the converter, both looking like the humanoids from his dream. He and Laureline obtain the converter, and he surreptitiously steals one of the pearls that had been given to the dealer as payment.  They now return to Alpha, where they are told by their Commander, Arün Filitt, (Clive Owen) part of the station has been infected by an unknown force, rendering it highly toxic, and troops sent into the area have not returned, plus the infection is spreading. Laureline and Valerian are assigned to protect the commander. However, while briefing an assembly about the infection, they are ambushed by the humanoids, who incapacitate all participants and kidnap him. Valerian frees himself and the others and chases the kidnappers, who head for the infected area. Valerian loses control of his vehicle and Laureline loses contact with Valerian who infiltrates the residential sector of the group with the help of a shapeshifter named Bubble (Rihanna).

While this is all starting to sound a little confusing, you probably can understand why I became a little loss in the beginning.  Trust me, it all comes together and even is fun and very interesting, especially when Rihanna enters the scene.  It definitely was not the fabulous movie they promised but it was descent.  You’ll learn why and who destroyed the planet Mül, as well as what happened to the planet’s beautiful inhabitants.  Also Valerian ask for Laureline’s hand in marriage, does she say yea or nay?  Valerian and the City of a Thousand Planets is not too violent and the special effects are fantastic.  Nicely done!    You will also get to see: Ethan Hawke as Jolly the Pimp, Herbie Hancock as a Defence Minister and hear John Goodman as the voice of Igon Siruss, a Kodar’Khan pirate captain and the galaxy’s most-wanted criminal.  Check it out!

I wasn’t thrilled when they started making my beloved Spiderman movies with someone other than Toby MaGuire.  Not being into the comic book scene, I was very surprised and confused when they remade Spiderman instead of continuing where the last Spiderman movie left off. This surprise sort of clouded my judgement towards the new Spider-man series making me very unhappy with the new film.  I’ve since had time to adjust and see the errs of my ways.   Little did I know Spiderman is a trilogy.   I went into the Spider-Man 2 movie with great expectations.  I knew a lot of fans were not too excited about the movie after seeing it but I forged on with my new attitude anyway.  Oddly, I don’t agree with the fans who didn’t think  much of Spider-Man 2.  I think it was fantastic.  It was more true to the comic book story (which I read up on) and it had lots of action and endless special effects.  Hollywood threw everything at Peter Parker, including the kitchen sink.  I like the added original comic book character of Gwen Stacy played by Emma Stone and I love Sally Field as Aunt May.  I even like Andrew Garfield as the new Spider-Man.  TAMN2 had all the usual bells and whistles; villains like Harry Osborn/The Green Goblin played by Dane Dehaan, who wants Spiderman dead, the unresolved death of Peter Parker’s parents, Oscorp powers that be cover-ups and always a new and different super-villain struggling for power.   In this case, Jamie Foxx as Max Dillon/Eletro was quite convincing as an invisible person who finally gets noticed, albeit in a bad way.  I couldn’t see anything not to like, as this movie wasn’t any different than other Spider-Man movies.  Lots of destruction, action, romance and special effects.  There’s so much going on in this movie, you won’t have time to be bored or uninterested.  Some say Peter Parker’s relationship with Gwen Stacy is corny and cheesy but I disagree.  I guess it’s a personal call — you’ll have to decide for yourself.  TASM2 is worth seeing on the big screen and runs 2 hours and 22 minutes.  I found the movie very entertaining.