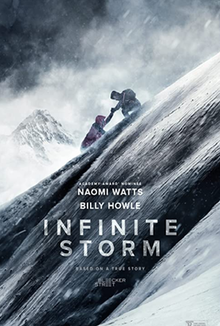 Infinite Storm is a drama adventure directed by Małgorzata Szumowska and Michał Englert. Its screenplay by Josh Rollins is based on the article High Places: Footprints in the Snow Lead to an Emotional Rescue. The film focuses on a rescue agent who saves a desolate young man who has become trapped on a mountain during one of the worse storms they’ve had in decades. Because there are so many horror or scary movies out, I decided to see one that didn’t fit into that category.  Infinite Storm seemed safe, so I watched this film and found I was right, it was far from the average scary movie but was scary and horrifying in its own rights.  I enjoyed Infinite storm.

Pam Bales (Naomi Watts) is a search and rescue volunteer.  It was Oct. 17, 2010, despite warnings of a severe storm brewing, she sets off on a hike to the top of Mount Washington. As the storm starts to become more fierce, she decides to return to safety but discovers sneaker tracks in the snow. Pam comments, “seriously, sneakers?” She follows the tracks and finds a man sitting motionless, cradled by large rime-covered boulders, just off the Clay Loop Trail.  He appears to be incoherent, she calls out to him but he doesn’t answer.  Hypothermia prevented him from moving his limbs or responding.  Since he couldn’t talk, she gives him a name, “John” (Billy Howle).  He was dressed in tennis sneakers, shorts, a light jacket, fingerless gloves, and no hat. Frozen and scared, Pam uses everything in her arsenal to warm him up and the two begin a dangerous trek down the mountain to safety.  Faced with many obstacles on the way down, they forged onward, braving the freezing winds, trying to get to the bottom before nightfall and before the temperature drops another 20º. Falling into a rushing river, John almost drowns, all while Pam has continuous flashbacks of her own tragic past regarding her two young daughters. After almost freezing to death, the two manage to make it to safety only to have “John” drive off suddenly without so much as a thank you. Pam tries desperately to find out his real name. 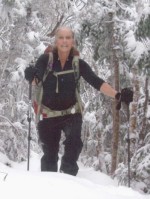 Infinite Storm is based on a true story and is pretty accurately told.  They could have added much more dramatic events but it appears they decided the original story had enough drama to carry this film to an exciting conclusion.  I agree this story was intense and served its purpose of informing the audience of the dangerous journey Pam and “John” embarked upon, making note of the existence of mental illness.  As I watched Pam taking off and adding on layers of clothing while in freezing temperatures, I actually felt the cold.  The scene when Pam removed clothes from “John” and rapidly massaged his feet to gain friction and warmth in his body was amazing.  Their journey down the mountain was extreme, exciting, and entertaining.  There are more mysteries and challenges to be resolved as the movie proceeds to the finish line.  The review aggregator Rotten Tomatoes reported an approval rating of 55%, with an average rating of 6/10, based on 51 reviews. The site’s critics’ consensus reads: “Infinite Storm’s dramatization of a real-life story feels frustratingly incomplete, but that’s often outweighed by Naomi Watts’ outstanding performance.” I recommend Infinite Storm to anyone who likes an exciting drama with calm, simple, and intense resolutions.  In theaters only, Check It Out!