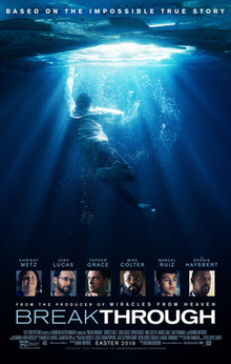 Breakthrough is a Christian drama directed by Roxann Dawson and written by Grant Nieporte, based on the Christian book named The Impossible, an account of true events written by Joyce Smith with Ginger Kolbaba. Breakthrough tells the story of a St. Louis teenager who slipped through an icy lake in January of 2015 and was under the water for fifteen minutes before resuscitative efforts were started.  Bring tissues, Breakthrough is a true tear-jerker.

John Smith (Marcel Ruiz) is a fourteen-year-old Guatemalan boy raised in Lake St. Louis, Missouri by his adoptive parents, Brian (Josh Lucas) and Joyce Smith (Chrissy Metz). Though they were loving and supportive, John struggled with abandonment issues, feeling his birth parents didn’t want him.  Although his adoptive parents tried to explain that there are many reasons to give a child up for adoption, their explanations fell on deaf ears.  John developed a pretty bad attitude and rebelled against his parents and teachers.

In Christian Middle school, John’s class was assigned the task of presenting a narrative about their family background. On his day to present, John admits he did not do the assignment. His basketball coach Paul (Danny Wattley), who had promised him a starting position, warns John that if he gets a failing grade, he will be benched. John later gives a half-hearted presentation, saying that everyone already knows he is adopted and he does not know much about his true background. John was an avid basketball player who stood a chance of playing professionally someday, except he didn’t share and had a habit of hogging the ball.  Being popular, he didn’t think there were consequences for his actions until he and his friends Josh (Isaac Kragten) and Reiger (Nikolas Dukic) went out onto a frozen lake, ignoring a neighbor’s (Cory Wojcik) warning. The resident calls the police, and all three boys fall through the ice. Josh and Reiger manage to swim to the surface and are rescued by first responders. Two rescuers dive in but are unable to find John. As they are about to give up, one of the rescuers, Tommy Shine (Mike Colter), hears a voice telling him to go back. Thinking the voice came from his chief (Chuck Shamata), he tries again and manages to find and lift John to the surface. With no pulse or breath, John is taken to the local hospital. After John still fails to register a pulse, the attending physician Dr. Sutterer (Sam Trammell) gives Joyce a chance to say goodbye. A weeping Joyce cradles her son in her arms, pleading with the Holy Spirit not to let John die.

What happens next, is one for the books.  Breakthrough is a true story and is called a spiritual or faith-based movie.  For me, Breakthrough is the way it should be for each of us who believes in GOD and has true faith.  If anyone I knew fell through the ice into a freezing cold lake, you can bet I’d pray non-stop for their recovery until something happened, good or bad.  These boys used their free will, albeit dumb, when they decided to do something they were warned not to do.  GOD had nothing to do with them falling through the ice but everything to do, through prayer, with getting them out.  Breakthrough was well-acted, despite the disastrous situation, entertaining and most informative.  There were many touching scenes and an abundance of prayer from friends, the family’s pastor, Jason Noble (Topher Grace), schoolmates and even their expert, Dr. Garrett (Dennis Haysbert). Because there is no explanation, rhyme or reason for many events that took place, we recognize the events as miracles, which were happening all over the place.

Breakthrough received mixed to positive reviews from critics, who praised the performances and inspirational messages but called the plot predictable despite being a true story. According to the review aggregator Rotten Tomatoes, 61% of critics have given the film a positive review based on 62 reviews; the average rating is 5.52/10. The website’s critics consensus reads, “Like its lead character, Breakthrough is fiercely focused on faith – but its less subtle elements are balanced by strong performances and an uplifting story.” Breakthrough grossed $40.7 million in the United States and Canada, and $9.7 million in other territories (including $5.9 million in Brazil), for a worldwide total of $50.4 million. I highly recommend Breakthrough, so Check It Out!

The Dark Tower is a science-fiction/fantasy/western adaptation of a Stephen King novel of the same name.  I usually don’t fancy Stephen King novels but I love Idris Elba and Matthew McConaughey, as well as a love for fantasy and science-fiction movies. I didn’t hear good things about The Dark Tower, so my expectations of the film were pretty low, yet I was pleasantly surprised. This is why I critique movies from the perspective of the standard viewer rather than the critic’s point-of-view. I ask myself basic questions as part of my analysis that falls into three separate areas: 1) Was I entertained?  (Did the movie make me laugh, cry, shout in anger or make me want my money back?)  2) Did the movie send a message or did I learn anything? (Did the movie teach me something about myself or the world at-large or do I now know something profound about history that makes a difference to me?)  3)  Was the story brilliant or was the plot dull, offensive or ambiguous?  (could the plot be life changing for someone, including myself, does the way they faced adversity have a logical conclusion or was this just a big waste of time?)  While all three of these situations may not necessarily apply to every movie I see, at least two out of three do. My mission is not to analyze films for their literary content or even ones acting abilities. Yet, entertainment value and relevancy has to exist for me to label a movie as a good film.

Based on my formula, The Dark Tower falls under two of my three areas for analysis.The Dark Tower is about a mythical structure/tower that supports all realities.  Walter Padick / The Man in Black (Matthew McConaughey) and his nemesis, Roland Deschain / The Last Gunslinger (Idris Elba) are on opposing sides of the tower. An 11-year old boy, Jake Chambers (Tom Taylor) has visions of a man in black who seeks to destroy a tower that protects many worlds, including Earth.  He also dreams of a gunslinger who opposes the man in black. Jake’s mother Laurie Chambers (Katheryn Winnick), stepfather and psychiatrist Dr. Hotchkiss (José Zúñiga) dismiss Jake’s dreams as trauma, resulting from the death of his father (Karl Thaning) the previous year.

Given Jake’s strange behavior, his school suggested that he be temporarily admitted into a psychiatric facility where he would be rehabilitated. At his home in New York City, a group of workers from the facility appear to take Jake away but he recognizes them from his visions as monsters disguised as human, and flees. Jake tracks down an abandoned house that he recognizes from one of his visions and discovers a high-tech portal, which allows him to travel to a post-apocalyptic world called Mid-World.  Once in Mid-World, Jake encounters the last Gunslinger, Roland Deschain from his visions. Roland is pursuing Walter Padick, the Man in Black who had also appeared in his dreams across a desert, seeking to kill him in revenge for the murder of his father, Steven (Dennis Haysbert). He explains that Walter has been abducting psychic children, and is attempting to use their powers to destroy The Dark Tower, a fabled structure located at the center of the universe; this will allow monsters from outside of the universe to invade and destroy the worlds that the tower protects. Roland takes Jake to a village to have his visions interpreted by a seer. Learning of Jake’s escape and journey to Mid-World, Walter investigates, and realizes that Jake has enough psychic potential to destroy the Tower without any help from other children.

Since The Dark Tower is derived from a comic book series, which I’ve never heard of, this is my first encounter with this story and its characters.  I mention this because many fans are disappointed that this adaptation does not follow the comic book series closely.  My critique is strictly from a new viewer’s perspective, with no prior knowledge of The Dark Tower.  As usual, I am stopping here because I do not want to give away any more of the story, which has a lot more twist and turns.  I really enjoyed the film, “what you see is what you get”.  It was suspenseful and entertaining and had a good message.  I think it’s worth checking out and the acting was excellent!  I understand there are 2 sequels in the works.

I was disappointed in Think Like A Man Too!  It was too slap stick for me.  Kevin Hart’s rantings really got on my nerves.  If he had toned his character down some, it would have been a different ballgame.  It seems like the director tried to steal a page from” Hang Over 3″ and “Last Vegas” with an over the top chain of funny events in “Sin City”.  Both movies were better than Think Like a Man Too.  There were some funny parts, but not funny enough to spend the price of a movie ticket to see it.  The plot was okay but the craziness that followed was just plain stupid.  What a waste of talent.  You would think with this star studded cast, you’d get a pretty good movie, NOT!  I even resented some of the insinuations because Think Like a Man Too crossed the line in ethic jokes.  I don’t like any race of people to be the brunt of  bad jokes or bad dialogue.

One of the couples from Think Like a Man Too is getting married.  Kevin Hart is (erroneously) the best man.  While he thinks he’s the best man for the job, he ends up being the worse.  5 couples make up the wedding party accompanied by an over bearing, control freak mom who doesn’t think the bride is good enough for her son.  The problems begin with each gender’s expectations of the bachelor and bachelorette parties, respectively.  Other problems include a reservation misunderstanding, the grooms mother and one couple’s dedication to their jobs.  If you can get through Kevin Hart’s rantings, you might enjoy the rest of the cast that includes: Michael Ealy (Dominic), Jerry Ferrara (Jeremy), Meagan Good (Mya), Regina Hall (Candace), Dennis Haysbert (Uncle Eddie), Taraji P. Henson (Lauren), Terrence Jenkins (Michael), Jenifer Lewis (Loretta), Romany Malco (Zeke), Gabrielle Union (Kristen), Kevin Hart (Cedric), Gary Owen (Bennett) and Caleel Harris (Duke).  My recommendation is wait for the DVD which releases on 9/16/14.