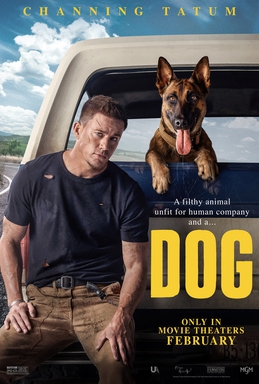 “Dog” is a comedy-drama directed by Channing Tatum and Reid Carolin, both making their respective feature directorial debuts. The film is about a U.S. Army Ranger who grudgingly must escort the Army Ranger dog of his fallen commander to his funeral, 1,500 miles away in three days.  I was drawn to Dog because I am a dog lover and a big fan of Channing Tatum.  I thought Dog was an emotionally, well-written and well directed family movie.

Both Jackson and Lulu suffer from traumatic brain injury, due to their deployment in the Middle East. Jackson requires a letter of recommendation from a superior officer to clear him for consideration for a job with the diplomatic security corps.  While Jackson and Lulu race down the Pacific Coast, they encounter several setbacks and experience the likes of who each other has become since the war. Additionally, Jackson thinks he has nothing but the Military to look forward to and the future of Lulu is to be put down after the funeral.  Along the way, Jackson loses it as Lulu destroys the front seats of his 1984 Ford Bronco while having one of her many fits of anxiety attacks. Jackson has to come to terms with his Post-Traumatic Stress Disorder (PTSD) as well as his difficulty with making emotional connections. On their way to the funeral, Jackson takes Lulu to visit her twin brother (Duke) at a friend’s Noah (Ethan Suplee) home.  Jackson is shown that the dog can be calmed with a little loving care.

I enjoyed Dog and thought it was a solid family movie.  There are a few curse words and one scene that suggest a threesome that doesn’t happen.  Lulu, who barked her way through the entire production is more than a handful.  Together, Jackson and Lulu get into many situations because of their stubbornness not to give in to each other.  There’s plenty of humor, adventure, and excitement.  “Dog” is in theaters and will not stream on Netflix or HBO MAX.  “Dog” received positive reviews from critics and was a box-office success, as of March 11, 2022, Dog grossed $43.8 million in the United States and Canada, and $6.4 million in other territories, for a worldwide total of $50.2 million. On the review aggregator website Rotten Tomatoes, 76% of 111 critics’ reviews are positive, with an average rating of 6/10. The website’s consensus reads, “Dog‘s dramatic breed is far from exotic, but solid narrative bones and well-trained work from co-director/star Channing Tatum make for a fetching viewing experience.”– Check It Out!

Is Hollywood running out of themes, plots and ideas?  Another bad ass comes out of retirement to kill, kill, kill.  The reason is usually because some family member (mostly the wife and/or kid) is killed or wronged somehow and vengeance is mine, saith who?  Bruce Willis, Denzel Washington, Vin Diesel, Jason Statham, Liam Neeson and Harrison Ford to name a few.  The other scenario is the country can’t survive without this former agent’s skill base.  John Wick, played by Keanu Reeves,  was very entertaining but nothing new.  I think John Wick may have piled up more bodies than anyone else but it was that familiar violence of a killing machine that no one can catch or stop.  So there you have it, after hearing the plot, you just have to sit back and enjoy all the killing.  There’s lots of action and many different ways to kill someone but overall, it consist of the plot and the kill.  BTW:  It was John Wick against the Russians.  I was not bored or disgusted with the dialogue, nor was I feeling like walking out, but I did feel like I’ve been here before, maybe a few times too many.  John Wick is a pretty good movie despite the familiarity.  However, no one would be upset if you wait for the DVD.

Because President Obama knows he’s under scrutiny regarding campaign promises, he probably should have gotten the white House Dog from a pound.  It’s really not that deep but the dog “do-gooders” will make it deeper than it should be. The media will jump in with big banners and lots of air time to drive home the point.

A loving, non-violent cute dog was adopted by a dignitary.  Does it really matter where the dog came from?  This dog was rescued from a misfitted family who obviously was willing to let the dog go.

Posted in HUMAN INTEREST, MUCH TO DO ABOUT NOTHING