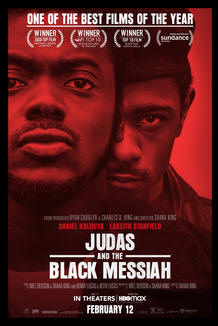 In the late 1960s, 17-year-old petty criminal William “Bill” O’Neal (Lakeith Stanfield), is arrested in Chicago after attempting to hijack a car while posing as a federal officer. Later, Bill is approached by FBI Special Agent Roy Mitchell (Robert Longstreet), who offers to have O’Neal’s charges dropped if he actually works as an undercover FBI agent for the bureau. Also, a car was thrown into the lure to sweeten the deal.  After much contemplation, O’Neal agrees and is assigned to infiltrate the Illinois chapter of the BPP and its leader, Fred Hampton (Daniel Kaluuya)

O’Neal began to develop a close relationship with Hampton. He sees first-hand that Hampton is working to form alliances with rival gangs and militia groups while extending community outreach through the BPP’s Free Breakfast for Children Program. O’Neal also begins learning the direction of the party and relays BPP info to Agent Mitchell in turn for money. Hampton’s gift of persuasion also helps him to form the multi-racial Rainbow Coalition. Eventually, Hampton falls in love with Deborah Johnson (Dominique Fishback), a fellow BPP member. When a fugitive Party member, George Sams (Terayle Hill), hides out at the local BPP office, O’Neal learns from Mitchell that George is also an informant whose presence in BPP offices allows the bureau to obtain search warrants.

As the plot thickens, you will see the good and the bad of the BPP as well as the fowl agenda of the FBI.  “Money is the route of all evil” is certainly working for O’Neal as he tries to, unsuccessfully, justify his actions. The performances were outstanding and the plot, which received the go-ahead and blessings of the Hampton family protrayed the truth as closely as possible.  The story includes several shoot-outs as well as an order by J. Edgar Hoover (Martin Sheen) to neutralize Hampton.  This is a riveting film, which also gives us great insight into some of todays struggles. Judas and the Black Messiah grossed $2.5 million from 1,888 theaters over its four-day opening weekend. According to review aggregator Rotten Tomatoes reports that 96% of 245 critics gave the film a positive review, with an average rating of 8.2/10. The website’s critics’ consensus reads: “An electrifying dramatization of historical events, Judas and the Black Messiah is a forceful condemnation of racial injustice — and a major triumph for its director and stars.” For his performance, Kaluuya was nominated for Best Supporting Actor at the Golden Globes and Screen Actor Guild Awards. The film ends with archive footage of Hampton’s speeches, his funeral procession, and an interview O’Neal gave in 1989. I like Judas and the Black Messiah because of it’s honesty, acting and direction — Judas and the Black Messiah is streaming on HBO/MAX  — Check It Out!