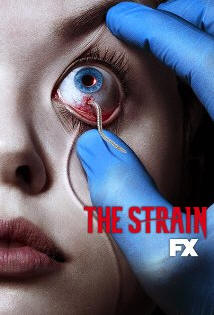 The Strain is only 1 season down but is a pretty good one.  It’s a little different as a horror/sci-fi series because it has a little of many horror characters rolled into one or two characters.  I couldn’t decide if the main monster was a vampire, zombie or the devil himself.  It all starts when a Boeing 767, on its way across the tarmac, stops at JFK then goes totally silent.  The engines are shut down, the belly of the plane is cold and there are no communications from anyone inside the plane, including the pilot and co-pilot.  Every organization known to the USA was brought in to investigate, including Corey Stoll who plays Dr. Ephraim Goodweather, the head of the Center for Disease Control ( CDC) Canary Team in New York City. After entering the plane, the team is able to determine, via ultra violet light, that some sort of bacteria was all over the plane and all but 4 passengers were dead.  The plot thickens from here and the mystery begins to unfold.  There is plenty of territorial fighting among the different agencies jockeying for position.  There is also a warning from an unlikely source that gets ignored but later picked up as the plot developes.  I’m trying not to give away too much of the story away because it is pretty good and the element of surprise puts the suspense where it belongs.  The Strain airs of the FX channel and I think it is different enough to hold your attention.  Check it out!