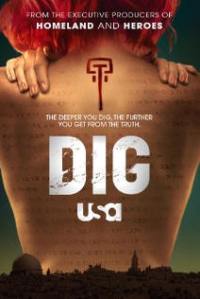 I’m not sure where this series is headed but it has started off as a very slow thriller.  Stationed in Jerusalem, there’s an FBI Agent, Peter Connelly (Jason Isaacs) sleeping with his boss, a murder and a past involving the death of Peter’s daughter.  Anne Heche plays Lynn Monahan, an FBI official who is concerned with making her departmental protocol work while sleeping with Peter.  A couple of mysteries are thrown into the mix every chance they get.  I am perplexed over a little boy being prepped for some unknown destiny that demands his feet never touch the outside world.  I’m not sure if he’s a clone or a science project.  This is one of the mysteries of Dig.  So far, it’s just okay but appears to have a lot of potential.  The murdered girl, Archaeologist, Emma Wilson (Alison Sudol) looks like Peter’s dead daughter and everyone is worried about his state of mind regarding him working on this case.  There’s a local detective, Golan Cohen (Ori Pfeffer) also working on the case but the two have no love loss between them until they start working together for the good of the case.  Keeping secrets has ensured mistrust and even an accusation of guilt that could lead to Peter being charged with murder.  It appears Peter has discovered a conspiracy 2,000 years in the making.  Watching these 2 officials try to come together is causing Peter to humble himself, which almost makes this series worth watching.  You’ll have to check this one out to determine if it’s worthy of my 7.5 rating.  Dig currently airs on USA.