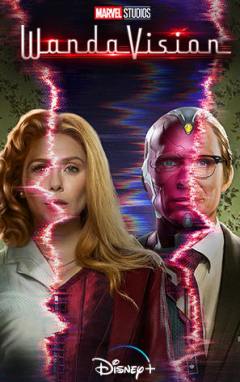 WandaVision is a television miniseries created by Jac Schaeffer for the streaming service Disney+. WandaVision is produced by Marvel Studios, with Schaeffer serving as head writer and Matt Shakman directing.  The film is based on the Marvel Comics characters Wanda Maximoff / Scarlet Witch and Vision. Set in the Marvel Cinematic Universe (MCU), it shares continuity with the films of the franchise and takes place after the events of the film Avengers: Endgame (2019). The series pays homage to past sitcoms, with Wanda and Vision living in a reality that takes them through different decades of television tropes.  I think WandaVision is brilliant.

Set three weeks after the events of Avengers: Endgame, WandaVision opens in the 1950s with Wanda Maximoff / Scarlet Witch (Elizabeth Olsen), still in her wedding dress, being carried over the threshold of their new home by Vision (Paul Bettany), still in his wedding attire.  They are living in the fictional, suburban town of Westview, NJ as Vision is employed at Computational Services Inc., and is unsure of what the company actually does. Meanwhile at home, Wanda meets their neighbor, Agnes (Kathryn Hahn) who helps Wanda prepare a romantic evening because a heart displayed on their calendar was mistaken as a symbol for their anniversary. The first two episodes of WandaVision are filmed in black and white and are viewed by someone via a 1960s TV set. As we try to make heads and tails of this series, we realize bits and pieces are being handed to us in each episode.  Wanda and Vision begin to suspect that things are not as they appear.  By episode two, we are introduced to more folks living in Westview, NJ.  Wanda and Vision are lured into participating in the neighborhood talent show, headed by Dottie Jones (Emma Caulfield Ford).  Wanda befriends Geraldine / Monica Rambeau (Teyonah Parris) who she later learns is a likely threat to their perfect world.  By episode three, the series is now aired in color and we have progressed to the 1970s. This is where things get extremely weird.  Wanda and vision meet Dr. Stan Nielson (Randy Oglesby), who gives the couple some exciting yet strange news.  They also encounter their next-door neighbor, Herb/John Collins (David Payton)  who they find gossiping with Agnes.  The two are clearly withholding viable information. By episode four, we pretty much have figured out what’s going on.  S.W.O.R.D. has entered the picture and we have progressed to the 1980s.

WandaVision is clearly different from the Marvel films or series we’re used to seeing.  I think WandaVision is a brilliantly put-together series using the likes of “I Love Lucy”, “Mary Tyler Moore”, “Elizabeth Montgomery”, “Dick Van Dyke” and “James Hugh Laurie” to create an atmosphere from the 1950s and beyond.  The series cleverly brings us up t0 the present dissolving of the imaginary town of Westview.  I loved the mystery surrounding the plot and the appearance of the Marvel Cinematic Universe (MCU) characters I hadn’t seen for a while. AT this writing, there are two more episodes left to air, one tonight and one next Friday, 3/5/21.  There’s lots of drama and activity I can’t write about in this review as I’m trying not to totally spoil the Wandavision Series for anyone. If you like special effects, you’ll get plenty of that here. If you like mystery, you’ll get plenty of that as well. If you like a good law-enforcement story, you’ll get that too! Wandavision is full of excitement, action, drama, comedy, and fantasy. The review aggregator website Rotten Tomatoes reported a 92% approval rating with an average rating of 7.91/10, based on 156 reviews. The site’s critical consensus reads, “Part loving homage to TV history, part off-kilter mystery, WandaVision is a wonderfully weird and strikingly bold step into the small screen for the MCU—and a perfect showcase for Elizabeth Olsen and Paul Bettany”. With one episode left to stream on Friday, 3/5/21, my final verdict is an A — WandaVision streams on Disney+ — Check It Out!

GET REACQUAINTED WITH the characters: