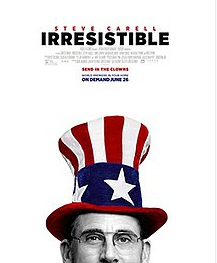 Irresistible is a political comedy written and directed by Jon Stewart. The film follows a Democratic strategist who tries to help a local candidate win an election in a small right-wing town.  Irresistible was released during the COVID-19 pandemic and cost a whopping $20 bucks to stream right into my family room.  Despite the inflated cost, I thought the movie was decent.

Irresistible opens with a successful Democratic campaigner, Gary Zimmer (Steve Corell) in despair due to the results of the 2016 election. One of Gary’s colleagues shows him a viral video of Marine Colonel Jack Hastings (Chris Cooper) reprimanding the mayor in a speech regarding the undocumented immigrant population who lives in his conservative hometown of Deerlaken, Wisconsin. Gary decides if he can run Hastings as the Democratic mayoral candidate in the next election, he can convince the American people in the heartland to vote democrat in the next presidential election. After arriving in Deerlaken, Gary soon meets Hastings and his daughter Diana Hastings (Mackenzie Davis) and pitches his idea. Hastings initially declines considering himself more of a conservative and having no real interest in politics, but later relents and agrees to run under the condition that Gary runs his campaign.

Despite the fact incumbent, Mayor Braun (Brent Sexton) is being funded by the Republican National Committee, Gary and Hastings must come up with new and innovative ideas to counter the endless money the RNC has to spend on the campaign. Gary has to depend on Democratic donations from elsewhere enabling him to upgrade their campaigning methods.

Irresistible turns out to be quite exciting and funny.  Of course in order not to spoil the movie, I will stop here except to say that there is so much more to Irresistible than you can figure out.  It’s not predictable and you will probably never see the end coming.  The film has many familiar comedians like Debra Messing and C.J. Wilson to liven up the plot.  I think this movie is a much needed comic relief in this time of tragedy and upheaval.  Irresistible was initially due to be released theatrically in May of 2020, however, the  COVID-19 pandemic happened, which caused Focus Features to release the film on video, on-demand, and in limited theaters, June 26, instead. The film received mixed reviews from critics, who called it “a soft political satire”. Irresitible is available via most cable carriers, Prime Video and Itunes.  DVD release is scheduled for September 1, 2020.  Check it out! 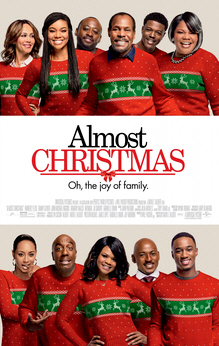 Almost Christmas is funny but sad. You might be cheered up on one hand but if you’ve ever lost a loved one, especially during the holidays, memories will come flooding back. After loosing his wife, Walter Meyers (Danny Glover) still living in the house where he and his wife raised their children, decides to have the traditional Christmas dinner with all the family, as usual. However, Walter knows if his daughters Rachel (Gabrielle Union) and Cheryl (Kimberly Elise) and sons Christian (Romany Malco) and Evan (Jessie Usher) can spend five days together under the same roof, it will truly be a Christmas miracle. As the family begins to gather, Walter realizes this reunion, without his wife, is easier said than done. The first family member to arrive is Aunt May, (Mo’Nique) who is a no nonsense tell-it-like-it-is kind of gal with lots of spunk.  Cheryl, a doctor and the eldest daughter, arrives for the holidays with her husband Lonnie (J. B. Smoove), a former basketball player who was famous when he played overseas in Croatia.  Rachel struggles to financially support herself and her daughter due to her recent divorce and is studying to become a lawyer.  Walter’s eldest son, Christian, struggles with balancing his campaign to become a congressman and his desire to spend time with his family. Christian even invites his campaign manager,  Brooks (John Michael Higgins) along, to get more work done.  Evan is a successful football player recovering from a shoulder injury, however when his coach tells him his arm is completely healed, Evan struggles to give up his pain medication.

The dysfunction and laughs started the moment Aunt May arrived.  Walter remained melancholy throughout the movie.  It was uplifting to see the family come together at the end and Walter come to gripes with his loss.  Almost Christmas was heart warming and gave a profound message to all at a time when we really need some comfort.  I think this movie is a refreshing change from the normal hustle and bustle of everyday life.