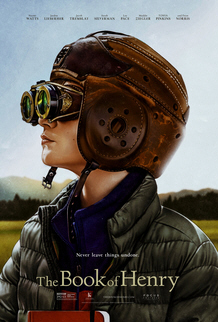 The Book of Henry is drama directed by Colin Trevorrow and written by Gregg Hurwitz. The Book of Henry is about an 11 year old genius who has taken on the role of an adult including concocting a plan to save a young girl living next door from abuse.  This film is not what the title implies but instead a beautiful story with multiply messages that says a whole lot about our society, our youth and gives us insight into some real soul searching.

The Book of Henry takes place in a small suburban town called Hudson Valley, where an 11-year-old boy genius named Henry Carpenter (Jaeden Lieberher) and his younger brother, Peter (Jacob Tremblay), are being raised by their single mother, Susan, (Naomi Watts) a waitress who is also working on writing children’s picture books. Henry uses his intellect to invest in the stock market and has built up a very substantial portfolio for his family. Henry is also very close to his brother, protecting him from the school bully as well as building Rube Goldberg machines in their tree house. Henry doesn’t have a whole lot of friends but is fond of his next-door neighbor, who is also his classmate, Christina Sickleman, (Maddie Ziegler) who he noticed has recently become withdrawn.  One day, while looking through his bedroom window, Henry discovers the reason for Christina’s mood change.  She is being abused by her stepfather, Glenn Sickleman, (Dean Norris) who is also the local police commissioner. Henry reports the abuse to social services and the school principal, Mrs. Wilder (Tonya Pinkins)  but Glenn has connections throughout the local government, and Principal Wilder is reluctant to challenge the commissioner without “conclusive evidence”. Henry is unable to get the authorities to launch a serious investigation that would protect Christina but keeps a red notebook in which he documents his thoughts, somewhat like a diary.

From this point on, The book of Henry takes on a whole different approach with a turn of events you’ll never see coming.  This film flew way under the radar and  most likely, in real life, never would have happened the way it’s portrayed in this movie. The message is so profound I think it’s worth seeing by any means. More than how it all comes together, it shows us how we, as a people, react in a situation when we should step up or get involved but let our fears hold us back.  This film is thought provoking, informative, inspirational, inspiring and emotional.  Most of all, The Book of Henry had a somewhat satisfying ending that made it all worth seeing.  You can get this film on DVD and Blu-Ray — Check it Out!  You won’t be sorry.