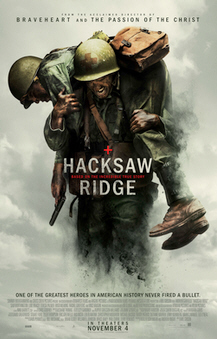 Mel Gibson may have fallen out of favor with Hollywood but his movies are awesome.  Hacksaw Ridge is another Mel Gibson master peace. Hacksaw Ridge is a biographical drama that takes place during World War II and tells the experiences of Desmond Doss, an American pacificist combat medic who is a Seventh-day Adventist Christian, refusing to carry or use a firearm or weapons of any kind. Doss became the first conscientious objector to be awarded the Medal of Honor, for service above and beyond the call of duty during the Battle of Okinawa.

Desmond Doss (Andrew Garfield), grew up just outside of Lynchburg, Virginia.  As a young man he nearly killed his younger brother, Harold “Hal” Doss (Nathaniel Buzolic), during an altercation. This experience along with his Seventh-day Adventist upbringing strengthened Desmond’s belief in the commandment, Thou shalt not kill. Years later, Doss meets and falls for a nurse, Dorothy Schutte (Teresa Palmer). when he brings a car accident victim to the hospital. At the outbreak of World War II, Doss, wanting to do his fair share, is motivated to enlist in the Army. His father, Tom Doss (Hugo Weaving), a troubled World War I veteran, is deeply upset by the decision. Because he is a conscientious objector, Doss intends to serve as a combat medic. Before leaving he asks for Dorothy’s hand in marriage and she accepts.

Doss is placed under the command of Sergeant Howell (Vince Vaughn). He excels physically but becomes an outcast among his fellow soldiers for refusing to handle a rifle and train on Saturdays. Howell and Captain Jack Glover (Sam Worthington), attempt to discharge Doss for psychiatric reasons but fail. Howell then torments Doss by putting him through grueling labor, intending to get Doss to leave of his own accord. Despite being beaten one night by his fellow soldiers, Doss refuses to identify his attackers and continues training. Doss was made fun of, his fellow soldiers suffered weekend passes withheld and much more was done to get Doss to quit and go home.  Still he would not leave.  Finally, upon completion of basic training and on leave, during which time Doss intended to marry Dorothy, he is arrested for insubordination for not following direct orders directing him to carry a firearm.  To see how Doss gets out of this, marries Dorothy and ends up assigned to the 77th Infantry Division and deployed to the Pacific theater during the Battle of Okinawa, you have to see the movie.

You will see the most remarkable scenes in a war movie imaginable.  I thought “Saving Private Ryan” was graphic but it really has nothing on Hacksaw Ridge, I was more than blown away.  These men were in the fight of their life is way beyond an understatement.  Doss did something so profound, he deserved more than a medal for, more than respect and more than a heroes recognition.  Mel Gibson proudly captured the fear, the intensiveness, the faithfulness, the determination and the heart that went into the task at hand and what it really is to fight a war on the battlefield.  There is nothing we, the civilians at home, shouldn’t want to do for these brave men coming home from war, broken up both mentally and physically and even whole after what they go through.  Hacksaw Ridge is a movie for all to see.  Of course if you can’t stand blood, it’s not for you.  GREAT JOB MEL AND THE CAST OF HACKSAW RIDGE, WHICH IS BASED ON A TRUE STORY!!