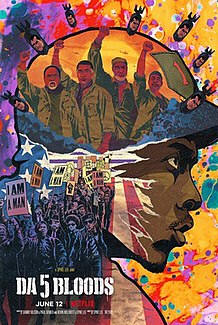 Da 5 Bloods is a war drama directed, produced, and co-written by Spike Lee. The movie was originally written by Danny Bilson and Paul De Meo in 2013, the script was re-worked by Lee and Kevin Willmott following the pair’s successful collaboration in BlacKkKlansman (2018). The film’s plot follows a group of four aging Vietnam War veterans who return to the country in search of the remains of their fallen squad leader, as well as the treasure they buried while serving there.  Da 5 Bloods is Chadwick Boseman’s last movie before his untimely demise in 2020. When I first heard of this movie, I was hell-bent on seeing it because of Chadwick Boseman, which was emotional and suspenseful.

A squad of five Black US Army soldiers during the Vietnam war, who are in the first infantry division call themselves the “Bloods”.  Their mission was to secure the site of a CIA airplane crash and recover the plane’s cargo, which includes a locker of gold bars intended as payment to the Lahu people for their help fighting the Viet Cong.  The Bloods, consisting of Paul (Delroy Lindo), Otis (Clarke Peters), Eddie (Norm Lewis), Melvin (Isiah Whitlock, Jr.), and their squad leader, Norman “Stormin” Earl Holloway (Chadwick Boseman) decide to take the gold for themselves.  They bury the gold with the intention of using landmarks to find and retrieve it at a later date.  However, Norman is killed during a Vietnamese counter-attack and the Bloods were unable to find any of the identifying landmarks because a Napalm strike destroyed them all.

Currently, the aging men, Paul, Otis, Eddie, and Melvin meet up in Ho Chi Minh City. A recent landslide had uncovered the tail of the crashed plane, so with this new information, they plan to find the gold and Norman’s body. Using Otis’s old Vietnamese girlfriend, Tiên (Lê Y Lan) as a tour guide, they set out to do what they wanted to do during the war, which was to find and retrieve the gold and bring back Norman’s body for a proper burial. Tiên introduces the Bloods to Desroche (Jean Reno), a French businessman who agrees to help the Bloods smuggle the gold out of Vietnam once they retrieve it. Soon thereafter, Paul’s son David (Jonathan Majors) joins the mission.

found Da 5 Bloods to be riveting, suspenseful, and very entertaining.  This is one of Spike Lee’s most memorable films.  The acting was brilliant. Delroy Lindo received raved reviews for his performance.  The plot takes you to the beautiful countryside of Southeast Asia. There are many twists and turns you won’t see coming.  I highly recommend Da 5 Bloods to anyone who enjoys a good, honest film that serves up a message that really hits home.  Da 5 Bloods had a production budget of $30–50 million and is among Lee’s most expensive films. It received critical acclaim, with critics praising its direction, story, themes, cinematography, and Lindo’s performance, with critics regarding it as a very “impactful” film. On the review aggregator website Rotten Tomatoes, the film holds an approval rating of 92% based on 275 reviews, with an average rating of 8.0/10. The site‘s critical

consensus reads: “Fierce energy and ambition course through Da 5 Bloods, coming together to fuel one of Spike Lee’s most urgent and impactful films.” IMDB rates this movie 6.4.  How apropos is Chadwick Boseman’s performance, which is a true added bonus to Da 5 Bloods, streaming on Netflix — Check It Out!