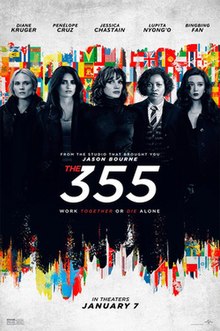 The 355 is a spy film directed by Simon Kinberg from a screenplay by Theresa Rebeck and Kinberg, and a story by Rebeck. The 355 follows a group of international spies who must work together to stop a terrorist organization from starting World War III. The title is derived from Agent 355, the codename of a female spy for the Patriots during the American Revolution. The 355 is about five women who save the world using their skills and training to keep the criminals from gaining access to a crucial device that would change everything. I enjoyed The 355 but found it unbelievable and a bit over the top.

At a location 150 miles south of Bogotá, Colombia, a drug lord, and his son present criminal mastermind Elijah Clarke (Jason Flemyng) with a special decryption program drive that can access any digital system on Earth. Clarke double-crosses and kills him just as the authorities raid the mansion. Amid the chaos, Colombian DNI agent Luis Rojas (Édgar Ramírez) obtains the device. CIA operative Mason “Mace” Brown (Jessica Chastain) is assigned to purchase the drive from Rojas. She heads to Paris with longtime partner Nick Fowler (Sebastian Stan), with whom she is also in a relationship. The deal goes south when German undercover BND agent Marie Schmidt (Diane Kruger) swipes the bag holding the money. Mace chases Marie, who escapes via the subway while Nick is confronted in an alley by Clarke.

At CIA headquarters, Mace learns that Nick was found dead in the alley. Her superior, Larry Marks (John Douglas Thompson), gives her his blessing to retrieve the drive by any means. Mace travels to London to recruit a longtime friend, retired British MI6 operative Khadijah Adiyeme (Lupita Nyong’o). Rojas arranges to hand the drive over to Graciela Rivera (Penélope Cruz), a DNI psychologist with no field experience. Marie is pushed to go after the device by her boss, Jonas Muller (Sylvester Groth), who brings up how Marie’s father was a senior BND agent whom she personally turned in after discovering he was a Russian mole.

The 355 has lots of action and is quite clever, but old school and predictable.  Joining together for one common goal is well-intentioned by the five women who made the decision to share the booty.  The only problem is that is not reality but for the purpose of the film, I guess it is.  They go about things, using their respective skills to get the job done, which made The 355 entertaining and exciting.  Despite the negative publicity, I can still see a sequel coming down the road.  There are lots of twists and lots of deceit and lots of humor. As of March 2, 2022, The 355 has grossed $14.6 million in the United States and Canada, and $12.3 million in other territories, for a worldwide total of $26.9 million.  The 355 garnered unfavorable reviews from critics. On the review aggregator website Rotten Tomatoes, 25% of 197 critics’ reviews are positive, with an average rating of 4.5/10. The website’s consensus reads, “It has a stellar cast and it’s conceptually progressive, but The 355 squanders it all on a forgettable story, unremarkably told.” The 355 is streaming on Prime Video — Check It Out!