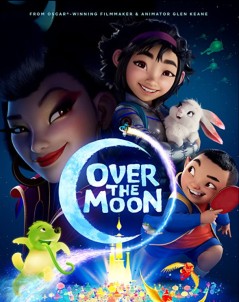 Over the Moon is a computer-animated musical family fantasy, directed by Glen Keane and co-directed by John Kahrs, from a screenplay by Audrey Wells with additional screenplay material by Alice Wu and Jennifer Yee McDevitt. The film was produced by Pearl Studio and Netflix Animation and animated by Sony Pictures Imageworks. Over the Moon is an animated children’s story about a  young girl who can’t accept her mother’s death or the fact that the Moon Goddess is only a legend.

A 9-year-old girl named Fei Fei (voice: Cathy Ang) is being told, by her mother Ma Ma (voice: Ruthie Ann Miles) and father Ba Ba (voice: John Cho), about the legend of the Moon Goddess, Chang’e (voice: Phillipa Soo). By taking a potion that would make her immortal, Chang’e became a goddess and ascended to the moon leaving her soulmate HouYi (voice: Conrad Ricamora) behind. She believes he will return to her on the moon where they will be happy for all eternity. In preparation for the annual Moon Festival, Fei Fei and her entire family make mooncakes for the village. Ma Ma gives Fei Fei a rabbit named Bungee and not too long after, Ma Ma falls ill and passes away.

Four years later, Fei Fei is now thirteen years old and still believes in Chang’e. To top things off, she learns that her father is engaged to Mrs. Zhong (Sandra Oh), who comes with an annoying 8-year-old son, Chin (Robert G. Chiu). Fei Fei’s family joins them for the Moon Festival celebration, still upset, she remembers her mother. Inspired by a crane and the legend of Chang’e, Fei Fei decides to build a rocket to the Moon to prove that Chang’e is real.

Over the moon is the ideal farse that would pique any child’s interest. The cinematography is outstanding.  The graphics are brilliant and the music was fantastic.  Over the Moon was nominated for only one category while I think it was lovely to watch and should have racked up more nominations.  Since this is a fantasy, anything sort of goes.  Fei Fei designs a rocket that resembles a Chinese paper lantern in the shape of a rabbit that uses fireworks to boost her speed. Okay, so the whole rocket thing was a little over the top but who’s to say how far one can go when creating a fantasy.  I enjoyed the film immensely.  The plot gets rather involved with so much going on that probably only a young child could keep up or even want to.  This is strictly one for the children. According to Rotten Tomatoes, 81% of 98 critic reviews are positive for Over the Moon, and the average rating is 6.90/10. The website’s critic’s consensus reads: “Although many of Over the Moon‘s narrative ingredients will seem familiar, the film’s absorbing animation offers colorful compensation.” Over the Moon earned a Golden Globe nomination for Best Animated Feature Film.