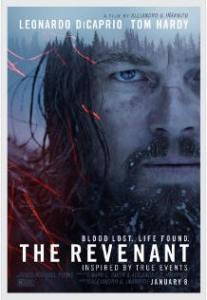 Dress warmly before you go to see The Revenant because this film takes place in the freezing cold. The entire movie never encounters a warm moment. The Revenant is brutal and because of one man, it’s incomprehensible. This doesn’t mean you won’t understand The Revenant, it just means the actions, evilness and disregard for another fellow Human Being will baffle you to the point of ambiguity, denial and/or contempt. Leonardo DiCaprio plays the role of his career as Hugh Glass, a frontiersman on a fur trading expedition set in 1823 Montana and South Dakota.

A quasi-military group of trappers are hunting for pelts in the unsettled wilderness of the Louisiana Purchase, under the command of Captain Andrew Henry.  A hostile Native American Tribe called Arikara ambushes the hunting party.  Only one third manage to escape, salvaging as much as they can while still under attack from the Arikara. To make matters worse, Glass the most experienced guide with the hunting party is mauled by a grizzly bear and severely wounded, further slowing down the party who is still being pursued by the Arikara.  Because Glass is so near death, one of the hunters, John Fitzgerald (Tom Hardy) suggest they put Glass out of his misery by killing him thus freeing the rest of the men to move faster.  Captain Andrew Henry (Domhnall Gleeson) the hunting party leader, offers payment to anyone who stays behind and cares for Glass while the rest of them moves on.  Jim Bridger (Will Poulter) a younger hunter and Hawk (Forrest Goodluck) Glass’ son volunteers to stay along with John Fitzgerald who will receive an additional bonus if he makes sure Glass gets a descent burial, if and when he dies.  Not to spoil the rest of the movie, I’ll only say this film really begins at this point.  The grizzly attack was nothing compared to the ensuing journey from this point on.

The Revenant is an adventure, drama, thriller that last 2 hours and 37 minutes long.  It’s directed by Alejandro G. Iñárritu and has already won 3 Golden Globe awards for Best Motion Picture – drama, Best Director and Best Actor.  Out of all the movies I’ve seen in 2015/2016, I didn’t think The Revenant was the best but I do think it’s a good film that you’ll certainly enjoy. I actually liked the Hateful 8 a tad bit better, but that’s just my opinion.  Check it out for yourself!