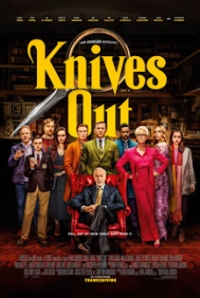 Knives Out is a murder mystery written, produced, and directed by Rian Johnson. Described as a modern take on the whodunit, the film follows a family gathering gone awry, after the family patriarch’s death leads a master detective to investigate. I looked forward to seeing this film and it did not disappoint.

Wealthy crime novelist Harlan Thrombey (Christopher Plummer) invites his family to a party at his mansion to celebrate his 85th birthday. The next morning, Harlan’s housekeeper Fran (Edi Patterson) finds him dead, apparently having slit his own throat. An anonymous figure hires private detective Benoit Blanc (Daniel Craig) to investigate. Blanc is accompanied by Detective Lieutenant Elliot (Lakeith Stanfield) throughout the investigation.  Blanc learns that Harlan had alienated many of the family: he had threatened to expose his son-in-law Richard Drysdale (Don Johnson) for having an affair; cut off his daughter-in-law Joni’s (Toni Collette) allowance for stealing money meant for Megan (Katherine Langford) his granddaughter’s tuition; fired his youngest son Walt (Michael Shannon) from his publishing company and cut his lazy grandson Ransom (Chris Evans) out of his will. Harlan’s daughter Linda Drysdale (Jamie Lee Curtis), Harlan’s mother Wanetta who is affectionately known as “Great Nana” (K Callan) and Harlan’s nurse Marta Cabrera (Ana de Armas) are all still in Harlan’s favor.

Knives Out is a typical “who done it” film cleverly put together by Rian Johnson for the modern viewer. I thought this ensemble cast was brilliant as was their story. Clear and comprehensible, the pieces were placed coherently and fit like a glove. If you’re looking for a good brain teaser, Knives Out is your cup of tea. Most of the family had a motive to murder Harlan but only one did it.  Find out when you see Knives Out! The film received critical acclaim, particularly for its screenplay, direction, and acting, and has grossed over $132 million worldwide against a $40 million budget. At the 77th Golden Globe Awards, the film received three nominations in the Musical or Comedy categories: Best Motion Picture, Best Actor for Craig, and Best Actress for de Armas. Check It Out! 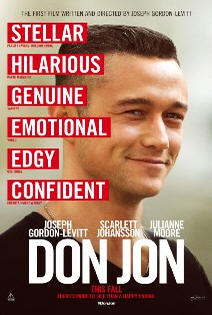 I found this movie a bit on the raunchy side.  Don Jon was about a young man who felt watching pron was better than the real thing.  He had plenty of women and was handsome and charismatic but didn’t really want to commit to anyone.  Along comes Scarlette Johansson and all goes to pot.  This movie was so repetitive, I could hardly wait for it to be over.  The same type scenes were played over and over.  Don Jon was played by Joseph Gordon-Levitt and I really became tired of him.  I normally like all his movies but this one just didn’t sit right with me.  Scarlette Johansson did little to save it.  Julianne Moore was the only saving grace.  Her character was somewhat calming and soothing to the film.  If you have nothing else to do or if you have nothing else to watch, then give it a whirl otherwise, skip this one!