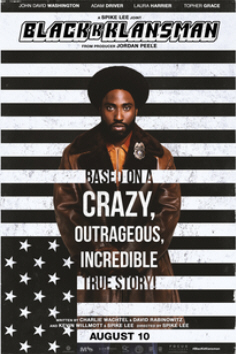 BlacKkKlansman is a biographical crime film co-written and directed by Spike Lee, based on the memoir, Black Klansman (2014) by Ron Stallworth. The film is produced by Lee, Raymond Mansfield, Shaun Redick, Sean McKittrick, Jason Blum, and Jordan Peele. I didn’t know quite what to expect from this movie — I went to see it without much information going in. To my surprise, based on a true story, BlacKkKlansman has turned out to be Spike Lee’s best, complete with a “scientific explanation” of white racial superiority by Dr. Kennebrew Beaureguard (Alec Baldwin), and my personal favorite.

Set in 1972 Colorado Springs, the plot follows the first African-American detective in the police department, who sets out to infiltrate and expose the local chapter of the Ku Klux Klan. In order to achieve this goal, Detective Ron Stallworth (John David Washington) will need the permission from the police department, Chief Bridges (Robert John Burke) as well as a White counter part, who turns out to be David “Flip” Zimmerman (Adam Driver) to make actual appearances to the KKK.

Ron’s first encounter was with national civil rights leader, Kwame Ture (Cory Hawkins), who has taken the name of African leaders. At the rally, Ron meets Patrice Dumas (Laura Harrier), the president of the black student union at Colorado College. Now a member of the intelligence division, Ron calls the president of the Colorado Springs chapter, Walter Breachway (Ryan Eggold) pretending to be a White man.

Not to be a comedy, there were several scenes that had me laughing my head off. I found BlacKKKlansman to be an inspiration to all humans and a very well acted and well written movie.  Note:  John David Washington is the real life son of Denzel Washington.  There are a host of brilliant actors in the movie with a plot you have to see to believe.  BlacKkKlansman sends a powerful message, which couldn’t have come at a better time.  Hate is so ugly and unnecessary.  What a waste of your mind when all you do is focus on race.  I urge everyone to see this movie, which by the way, is not for kids.  See it, I’m sure you’ll enjoy every second of BlacKkKlansman. Check it Out!

There’s not a whole lot to say about Spider-Man: Homecoming. I liked it and it was entertaining. I think I’ve outgrown the current format, as it no longer appeals to the child in me. Like Deadpool, I found the cheeky lines designed to draw attention like “look at me” and “I don’t think so” pretty corny and adolescent. I guess I’m more attuned to Tobey Maguire’s version of the super hero. This is not to say a younger audience would not find this version great plus this is how the comic book versions are written.  I knew there was a reason I didn’t read comic books.  Not my cup of tea.

The movie opens at the point when Tony Stark’s / Iron-Man (Robert Downey, Jr.) organization (US Department of Damage Control (DODC) has taken over cleaning up New York after the last big battle involving the “Avengers Initiative”.  Adrian Toomes / Vulture (Michael Keaton) and his salvage company were the former contractors until the DODC took over causing an enraged Adrian to be driven completely out of business.  Adrian decides to keep the Chitauri technology already scavenged and use it to create and sell advanced weapons.  All is well for Adrian until Peter Parker / Spider-Man (Tom Holland) appears, stopping Adrian and his crew at every turn.  Peter has been appointed to an internship by Tony Stark as Spider-Man to join the Avengers. Stark has warned Peter against involvement with dangerous criminals in favor of resolving easier local crimes.  Believing he can do more, Peter is determined to stop this ring of thugs from advancing any further. Peter totally ignores Stark’s warnings, thus proving to Stark, he is not ready for the position or the Spider-Man suit Stark has entrusted him to wear.

Parker quits his school’s academic decathlon team to spend more time focusing on his crime-fighting activities as Spider-Man. One night, after preventing criminals from robbing an ATM with their advanced weapons from Toomes, Spider-Man returns home and is surprised by his best friend Ned (Jacob Batalon) who is waiting for him while also discovering his secret identity. On another night, Parker comes across Toomes’ associates Jackson Brice / Shocker #1 (Logan Marshall-Green) and Herman Schultz / Shocker #2 (Bokeem Woodbine) selling weapons to local criminal Aaron Davis (Donald Glover). Parker nearly drowns intervening, and is rescued by Stark, who is monitoring the Spider-Man suit he gave Parker.  Toomes accidentally kills one of his own men, Brice, with a modified vibro-blast shooting version of the Crossbones’ gauntlet weapon, leaving Schultz to become the new Shocker.  Parker and Ned study a weapon left behind by Brice, removing its power core and so the journey continues.  Spider-Man gets into much mischief and even falls for a classmate named Liz (Laura Harrier).  You’ll have to check out the movie to see what happens next.

While I’m no longer a fan of this new Spider-Man format, I think there are a great many who will love it.  I think it’s just more appealing to a younger audience than an older one.  It continues to be well acted and has a brilliant cast.  One of the characters who played a rival, gained 61 pounds in order to play the role and guess who saves an announcement party at the end?  Oh yeah, does Peter become a permanent member of the Avengers? Check it out to get answers!