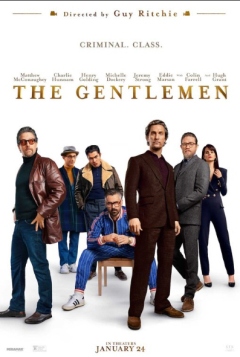 The Gentlemen is an action comedy film written and directed by Guy Ritchie, from a story by Ivan Atkinson, Marn Davies, and Ritchie. It follows an American marijuana kingpin in England who is looking to sell his business, setting off a chain of blackmail and schemes to undermine him. Having little knowledge about The Gentlemen, I was pleasantly surprised.

When Mickey Pearson (Matthew McConaughey), an infamous cannabis baron, who is a grower and dealer of marijuana decides he has had enough of the illegal drug profession, the word goes out that he wants to sell his lucrative business.  Several interested buyers compete for the sale. A private investigator Fletcher (Hugh Grant) is hired by Big Dave (Eddie Marsan) to investigate Pearson’s links to Lord Pressfield (Samuel West), a minor Royal with a heroin-addicted daughter. Fletcher offers to sell his findings (typed up as a screenplay entitled Bush) to Pearson’s right-hand man Raymond (Charlie Hunnam) for £20 million. Born in poverty in the US, Pearson won a Rhodes Scholarship to Oxford University, where he began selling marijuana to privileged fellow students before dropping out and building up his criminal enterprise by violence. Big Dave has decided to sell his business to American billionaire Matthew Berger (Jeremy Strong) for $400 million so he can retire peacefully with his wife Rosalind (Michelle Dockery).  Pearson is later approached by Dry Eye (Henry Golding), an underboss for Chinese gangster Lord George (Tom Wu) who offers to buy out Pearson’s business, but he refuses. When one of Mickey’s labs is raided by some unprofessional young adults, it is discovered that the crew belongs to Coach (Colin Farrell) who is very apologetic.  Good luck with trying to figure this one out, there’s much more to come.

As you can see, there are several players in The Gentlemen.  As Flecher spins his script to Raymond, you can see how complicated each player’s maneuvers make this an intriguing film.  I thought The Gentlemen was cleverly written and reminded me of several movies that were based on a similar premise, e.g. Knives Out, Parasite, and Uncut Gems.  This movie is fast-moving and will require your full attention in order to keep up. You will have to see The Gentlemen in its entirety as you won’t be able to solve this one on your own.   I was thoroughly entertained and highly recommend The Gentlemen as a refreshing and different tale of “who’s in charge”. As of February 9, 2020, The Gentlemen has grossed $26.9 million in the United States and Canada, and $33.5 million in other territories, for a worldwide total of $60.4 million. On review aggregator Rotten Tomatoes, the film has an approval rating of 73% based on 211 reviews, with an average rating of 6.35/10. Check It Out!