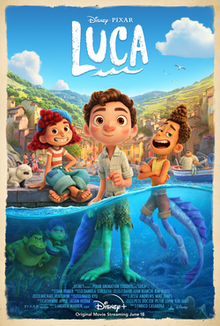 Luca is a computer-animated coming-of-age fantasy film produced by Pixar Animation Studios and distributed by Walt Disney Studios Motion Pictures. The film was directed by Enrico Casarosa (in his feature-length directorial debut), written by Jesse Andrews and Mike Jones, from a story by Casarosa, Andrews, and Simon Stephenson, produced by Andrea Warren. Luca follows a family of sea “monsters” that change into human form when they emerge from the water.  This film was real family fun from beginning to end with a profound message about judging people and making assumptions without reason.

In the summer of 1959, young, timid sea monster Luca Paguro (voice: Jacob Tremblay) herds goatfish off the coast of the Italian town of Portorosso. His parents Daniela  (voice: Maya Rudolph) and Lorenzo (voice: Jim Gaffigan), fearing that humans might hunt him for food, forbid him to approach the surface. One day, Luca meets Alberto Scorfano (voice: Jack Dylan Grazer), a fellow sea monster child who lives alone above the surface, claiming that his father simply is not around much. Alberto encourages Luca to venture out of the ocean, showing him that sea monsters turn into humans when dry, but return to their true forms when wet. Luca follows Alberto to his hideout on Isola del Mare, where the boys connect while making and riding a makeshift, fragile Vespa.

Once Luca’s parents discovered what he was up to, they made a decision to send Luca to live in the deep sea with his uncle Ugo (voice: Sacha Baron Cohen). In retaliation, Luca runs away with Alberto to Portorosso to find a real Vespa and travel the world. The boys mistakenly run into Ercole Visconti (voice: Saverio Raimondo), the local bully and five-time champion of the Portorosso Cup, a local children’s triathlon. Ercole tries to soak Luca in a fountain, but Giulia Marcovaldo (voice: (Emma Berman), a young girl, helps the boys escape. In hopes of winning the money needed for a Vespa, the boys and Giulia form a team for the triathlon, which involves swimming, pasta-eating, and biking. Unable to swim without revealing themselves, Luca and Alberto take on the biking and pasta-eating portions of the race, respectively, while Giulia takes the swimming race. Upon learning this, Ercole vows to beat them and continue his winning streak. While the boys train for the race and befriend Giulia’s fisherman father Massimo Marcovaldo (voice: Marco Barricelli), who was born with only one arm, Luca’s parents head to the surface to find their son. Giulia teaches Luca about her school, and the two bond over a love of learning, especially about astronomy, and Alberto becomes jealous of Luca and Giulia’s growing friendship. When Luca starts ignoring Alberto’s advice and tries changing their plans so he could go to school instead of traveling the world, Luca and Alberto quarrel.

Luca is one of the better animated features because the message it sends, in this day and age, about bullying and racism is spot on.  Luca is a sea monster/human and all of the other characters are just human.  We tend to fear what we don’t know or what is different.  Most of the time, we are wrong however, we teach our children and convince ourselves if it is not like us, it’s bad.  Luca negates that myth and is a great teaching tool for young children. The story is adventurous, exciting, and fun.  I enjoyed Luca very much. By December 2021, the film grossed $49.8 million worldwide. On the review aggregator website Rotten Tomatoes, the film holds an approval rating of 91% based on 290 reviews, with an average rating of 7.30/10. The website’s critics consensus reads, “Slight but suffused with infectious joy, the beguiling Luca proves Pixar can play it safe while still charming audiences of all ages.” score and the story.  Disney + is streaming Luca and is free if you have a subscription — Check It Out!

In my humble opinion, War for the Planet of the Apes is by far the best Planet Apes movie I’ve seen and I’ve seen them all.  Incredible makeup, incredible acting, incredible story and incredible directing (Matt Reeves).  The cinematography is outstanding and the message was loud and clear.  This movie couldn’t have come at a better time in our lives.  At one point I just weld up and as tears streamed down my face, couldn’t help but wonder why man makes an already difficult world so much more difficult by adding their egos and evil ways to the mix because one thing is certain, WE ALL WILL DIE SOMEDAY!  Having said that, I had to give War for the Planet of the Apes a whooping 10.

Now hiding in the woods after being attacked by the US military group, Alpha-Omega, Caesar, who is the current leader of the Apes, offers the humans peace if the Apes are left alone to live in peace.  Unfortunately Koba, the former rebellious leader of the Apes, who is now dead, still has many followers that are against Caesar and his clan of intelligent Apes and have joined the US military against Caesar.  After a recent attack, Caesar and his clan decides it’s best to go further into hiding by relocating to a new home across the desert where they won’t be found by Alpha-Omega and their mysterious Colonel.

The night before Caesar and his clan are to journey to their new home, they suffer another attack in the night and many Apes are killed, including Caesar’s family, causing him to go after the mysterious Colonel of the Alpha-Omega and the gorilla called Red.  Caesar’s youngest son Cornelius is now the only family he has left alive.  From this point, the emotions and intensity of the journey is overwhelming.  As the pieces fall into place, War for the planet of the Apes is anything but predictable.  We find out the fears and secrets that drive both sides (Man and Ape).  While the other Apes headed for the desert, Caesar along with Maurice, Luca and Rocket are forced to perform many ill gotten deeds like asphyxiating another Ape, which causes Caesar to worry if he is becoming just like Koba.

Not only is War for the Planet of the Apes the best of the entire franchise, it’s also one of the most entertaining movies of the summer.  Check it out, you won’t be disappointed!  Below are the cast of characters (apes and humans, alike) with  synopsis of each, courtesy of Wikipedia).