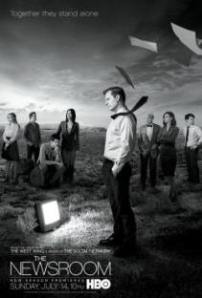 The Newsroom is an excellent series presented on HBO about just that, a newsroom and the goings on that go on.  Jeff Daniels, one of my all time favorites, plays Will McAvoy, the Head Anchorman and Emily Mortimer plays Mackenzie McHale, the Program Manager and former girlfriend to Will.  Sam Waterston plays Charlie Skinner, the General Manager of the whole news team and Jane Fonda plays as Sam’s boss.  This is a well put together cast and the dialogue is absolutely brilliant.  I’ve been glued to my seat since it started. It is fascinating to watch what it takes to put on a news show and be politically correct while pleasing the public at the same time.

I’ve just learned that The Newsroom has been cancelled after just 3 seasons.  I’m not sure why but I am terribly disappointed.  There is talk that perhaps Netflix will pick up the series and stream it.  I surly hope this happens.  It seems the good ones always gets canned.