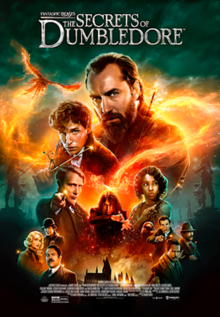 Fantastic Beasts: The Secrets of Dumbledore is a fantasy film directed by David Yates from a screenplay by J. K. Rowling and Steve Kloves. It is the sequel to Fantastic Beasts: The Crimes of Grindelwald (2018), the third installment in the Fantastic Beasts film series, and the eleventh overall in the Wizarding World franchise. Set several years after the events of its predecessor, the film sees Albus Dumbledore tasking Newt Scamander and his allies with a mission that takes them into the heart of dark wizard Gellert Grindelwald’s army. While I find Dumbledore films sometimes a little hard to follow, I think Secrets of Dumbledore was well done and a little less complex.

It was 1932 in Kweilin, China, when Newt Scamander (Eddie Redmayne) helped a Qilin, which is a magical creature that can see into one’s soul as well as the future, give birth. Gellert Grindelwald’s acolytes, led by Credence Barebone (Ezra Miller), attacked and killed the mother and kidnaped her newborn. Grindelwald (Mads Mikkelsen) subsequently killed the creature to harness its ability of precognition. However, unbeknownst to them, the Qilin had twins, the younger of which Newt was able to save.

Unable to battle Grindelwald due to their blood pact, Albus Dumbledore (Jude Law) recruits Newt, his brother Theseus Scamander (Callum Turner), Ilvermorny Charms teacher Lally Hicks (Jessica Williams), Senegalese-French wizard Yusuf Kama (William Nadylam), American No-Maj Jacob Kowalski (Dan Fogler) and Newt’s assistant Bunty Broadacre (Victoria Yeates) to thwart Grindelwald’s plan for world domination. Yusuf Kama is tagged to be a spy in Grindelwald’s inner circle while the others are sent to Berlin, Germany. Once there, the group witnesses Grindelwald being acquitted of all criminal charges by the International Confederation of Wizards (ICW) and subsequently running for the office of Supreme Mugwump. The ICW believes arresting Grindelwald could gain him more support, but his being defeated in a legitimate election will erode his strength.

At this point, the story is beginning to take shape.  It’s all about Grindelwald working feverously to take over the world.  He is undermining the German Ministry of Magic and planning to get rid of key candidates who are running against him.  Newth tries his best to stop Grindswald but was unable to even large a simple complaint against him.  The story and special effects start to get very exciting and the plot, as they say, thickens.  I found this version of the Dumbledore story to be one of the best.  It’s a showdown between good and evil, for sure.  The special effects are outstanding and the acting was done in true Harry Potter style.  Always intended to be “at least” a trilogy, the third Fantastic Beasts film was slated for release in November 2020. It was eventually pushed back to a July 2022 release, and much of the main cast from the first two films confirmed their involvement in March 2020. Principal photography was set to begin in early 2020 but was postponed due to the COVID-19 pandemic, eventually commencing in September 2020. FYI: Johnny Depp, who portrayed Grindelwald in previous films, initially was set to return and filmed one scene for the movie, but in November 2020 was asked to resign following a court case finding against him regarding allegations he committed domestic violence; Mikkelsen replaced him later that month.