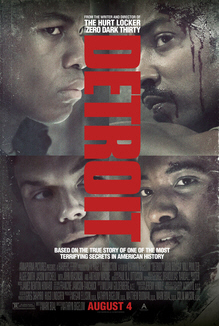 It’s hard to believe a movie based on true events that happened in  1967, at the Algiers Motel in Detroit during the 12th Street riot is still playing out in 2017. I’m sure it was just as shocking these events were happening in 1967, since slavery was suppose to be a thing of the past and the emancipation meant hope for a brighter future. I’m even sure many people won’t believe this really happened and many won’t care but one thing is certain, 3 young Black adults were killed by the hands of the police force at a very troubling time. These young adults will never see the light of day nor have another opportunity to do anything, good or bad. Their crime was the color of their skin. That was sad then and it’s sad now, it will be sad forever more. Kathryn Bigelow felt she had to bring this riveting story to the world, because no one else would — for that, I say thank you. You did an outstanding job reporting what happened as written by Mark Boal to the best of your ability.

On July 23, 1967, the Detroit police staged a raid on an unlicensed club that was celebrating the return of black veterans. A riot started while suspects were being arrested. The mob started throwing rocks at the officers before looting nearby stores and starting fires. Unable to maintain any semblance of order, Governor George W. Romney authorizes the Michigan National Guard and Army paratroopers to enter Detroit to provide assistance. On the second day of rioting, two cops pursue a fleeing looter. One of them, Philip Krauss, (Will Poulter) mortally wounds the man with a shotgun against orders, but is allowed to remain on active duty until his superiors can decide whether to file murder charges.

The Dramatics, a professional black R&B group, arrive in Detroit hoping to score a recording contract. Seconds before their scheduled performance at a music hall, the police shut down the venue and order them to leave the city. while in route, their bus is attacked by rioters and the group subsequently splits up, with lead singer Larry Reed (Algee Smith) and his friend Fred Temple (Jacob Latimore) renting a room at the local Algiers Motel for the night. They meet 2 White girls, Julie Ann (Hannah Murray) and Karen (Kaitlyn Dever), who introduce them to their friends Carl Cooper (Jason Mitchell) and Aubrey Pollard (Nathan Davis, Jr.) who were already staying at the motel. Carl and another friend (for fun) staged an innocent prank using a toy starter pistol, upsetting Julie and Karen, who move to the room of Greene (Anthony Mackie), a Vietnam War Veteran, while Larry and Fred return to their own room.

In the meanwhile, not far from the motel, Melvin Dismukes (John Boyega), a Black private security guard was assigned to protect a grocery store from looters, ingratiates himself with the Guardsmen so he won’t be mistaken for a rioter. Not expecting any problems, they all hear shots fired in their direction, which they all perceive as a sniper attack coming from the Algiers. A detachment of police arrive, led by Krauss, who immediately guns down one of the Algiers’ guest, plants a knife next to his body and watches him as he bleeds out.

This marks the beginning of the Detroit incident that caused this movie to be written in the first place.  I cannot go any further, you’ll have to see it to find out what happens next — Krauss seems to be the loose cannon and several others who followed him made it all come together as the inhuman, racist, murdering event it ended up being.  Just like the Holocaust, this is another moment in Black history that needs to be told, like it or not!  No one deserves to die because of their race or skin color!  Good job on telling a profound story.  Check it out if you haven’t!