Hustlers is a crime drama written and directed by Lorene Scafaria, based on New York magazine’s 2015 article “The Hustlers at Scores” by Jessica Pressler. Jennifer Lopez is also a producer on the film through Nuyorican Productions, alongside Jessica Elbaum, Will Ferrell, and Adam McKay through their Gloria Sanchez banner. The plot follows a crew of strippers in New York City who begin to steal money by drugging stock traders and CEOs who visit their club, then running up their credit cards. I had no idea the New Yorker article would become a movie, they did a good job.

In 2014, former New York City-based stripper Dorothy/Destiny (Constance Wu) is invited for an interview with Elizabeth (Julia Stiles), a journalist working on a story involving Dorothy’s former friend and mentor, Ramona Vega (Jennifer Lopez). Seven years prior, Dorothy, known by her stripper name as Destiny, is working at Moves, a strip club, to support her grandmother (Wai Ching Ho) but is barely getting by. Mesmerized by Ramona’s performance plus all the tips she earns, Destiny meets her on the roof of the club. Ramona looks Destiny over and decides to take her under her wing thus forming a formidable team. Destiny enjoys her newfound wealth and friendship with Ramona. A year later (2007), the financial crisis strikes and both women find themselves short of cash. Destiny becomes pregnant and bows out of the stripper scene. Unable to find a regular job,
Destiny goes back to stripping at the club but Moves has changed: the financial crisis has impacted their business, and the club is primarily staffed by immigrant women from Russia willing to perform sex acts for money, a line Destiny is unwilling to cross. She reconnects with Ramona, who introduces her to a new scheme. Along with her two protegées, Mercedes (Keke Palmer) and Annabelle (Lili Reinhart), Ramona targets rich men at bars, get them drunk, then escorts them to Moves where the girls steal their credit card numbers and charge them to their limit. Destiny joins in and learns Ramona uses a mix of ketamine and MDMA to impair judgment and cause memory loss in their targets, a tactic deemed worthwhile since their victims will rarely admit to being robbed by strippers.

Hustlers is a pretty decent, indecent movie about some very hard working women who feel instant, illegal money is worth the risk of jail. I must first mention 50-year old J. Lo has done a magnificent job of keeping her body sexy, tight and presentable for any role she’s up for.  While she looked a little amazon-ish next to 37-year-old Constance Wu, she still has it going on.  However, none were a match for Keke Palmer (26 years old) who was a fantastic addition to the gang.  Hustlers is obviously not for children nor is it for sanctified worshippers who don’t need to see how some desperate women choose to live their lives for money. Hustlers pretty much keeps you intrigued and entertained.  The film has grossed $110 million worldwide and received positive reviews from critics, with Lopez’s performance singled out for praise. I enjoyed Hustlers, especially the brilliant performances by J. Lo and Constance.  I recommend Hustlers for those who don’t mind a good sexy movie.  Check It Out!

The Mountain Between Us is an adventurous love story written by Chris Weitz and J. Mills Goodloe, based on a novel written by Chris Weitz and directed by Hany Abu-Assad. Played by two very popular, seasoned actors from different backgrounds whose characters are in a situation that otherwise would have taken them in very different directions. The story became a suspense thriller because of the situation in which they found themselves. The audience were involved in the couple’s survival even more than their potential love affair. I loved the story, especially the outcome.

After the cancellation of their flight, due to an incoming major storm, Dr. Ben Bass (Idris Elba) and photojournalist Alex Martin (Kate Winslet) solicit a local pilot, Walter (Beau Bridges) in order to get to Alex’s wedding and Ben’s scheduled surgery of a 10 year old child the next day. They board an uncharted flight with Walter and his dog. During the flight, the pilot (Walter) suffers a stroke. Unable to save Walter, the plane crashes on top of a mountain in the High Uintas Wilderness with Ben, Alex and the dog surviving with injuries and harsh weather conditions. Ben tends to Alex’s wounds and realizes they must come down from the mountaintop for any hope of survival. Alex asks Ben to leave her behind as he has a better chance of surviving to which Ben refuses. Instead, he climbs a peak in order to see if there are any structures nearby. On his descent he nearly falls off a cliff.  While Ben was away, Alex and the dog are discovered and attacked by a cougar.  The dog tries to defend Alex but is no match for the cougar and is wounded as the cougar enters the plane wreckage with bigger prey in mind. Fortunately, Alex fires a flare into the cougar before it attacks her. Ben returns to find a blood trail. Realizing Alex is in danger, he rushes towards the plane and finds Alex and the dog alive. He provides medical attention to the dog and later retrieves the body of the cougar which he uses as food. Stranded alone together for days and with little food, they find strength in each other to keep pressing forward in the freezing cold and snow. Realizing help is not coming Alex and Ben get into a heated argument about the best way to proceed.   She wants to move forward and he wants to stay with the wreckage for protection.  She ends up leaving with the dog at first daylight.  Once Ben awakens and discovers Alex is gone, he has to make a decision.

From here the journey continues, does Ben go after Alex and the dog?  Do they ever name the dog, do they fall in love, do they die or do they get rescued?  Does Alex marry her fiancé, Mark (Dermot Mulroney), whom she talks about constantly during their ordeal or do Ben and Alex get married?  How does it all end?  Check it out, all questions will be answered — it’s really a good love story, right to the last scene!

You can’t trust anyone these days! 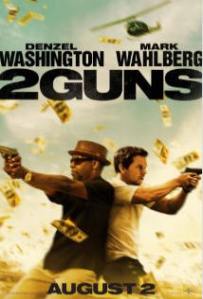 Washington who plays a DEA agent and Wahlberg (who plays a naval intelligence officer) adds up to a lot of viewing fun.  Although a dangerous endeavor (fighting crime), the director, Baltasar Kormakur managed to give us a lighthearted rendition of the novel it’s based on (The Boom).   Here’s the thing, Hollywood has a way of painting a picture for the pure entertainment of the viewing audience.  Everything falls nicely into place.  2 Guns has many bad guys who are not on one team.  You have a cartel (bad), the CIA (bad) and the Navy Intelligence (bad) vs. Denzel Washington and Mark Wahlberg (good).  This movie should be viewed as a fantasy because I can’t imagine events could go down this way and I’m sure, from a security stand point, it can’t.  However, I left this movie felling relaxed and happy and truly wanted to see more.  That’s what a movie like this is suppose to do, entertain and bring out happy endorphins.

Both actors did a very good job bringing a joyous film to life and you guessed it, I really like it and I recommend 2 Guns if you want to brighten your day.