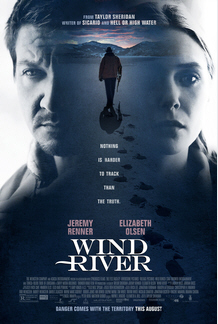 Not exactly as advertised but still a pretty good movie.  I liked Wind River because it was a little different than the run of the mill murder mystery.  The trailer made it seem more suspenseful than it was.  Like a bad cup of coffee, Wind River wasn’t full bodied.  It was more of a man’s movie.  Terse answers, short on detail, suppressed feelings and no real leaderships.  Of course all men don’t fit that description, but a lot do.

Wind River takes place in Wyoming on an Indian Reservation of the same name.  Fish and Wildlife Service agent, Cory Lambert (Jeremy Renner), stumbles onto an 18 year old dead woman, Natalie Hanson (Kelsey Chow), from the reservation.  She’s face down and frozen solid, barefooted, inappropriately attired for the subzero winter weather with blood stains on her pants and face.  It’s apparent Natalie was raped and murdered.  To help with the case, FBI rookie Jane Banner (Elizabeth Olsen), is assigned, who by the way, was also improperly attired and had to borrow clothing befitting the severe weather conditions.  It is believed the murder was committed between Natalie’s new, unknown boyfriend, Matt Rayburn (Jon Bernthal) or her drug addicted brother Chip Hanson (Martin Sensmeier), who is strung-out living with local dealers on the reservation in a double-wide trailer.

While Wind River was interesting, it was a bit slow.  It’s a murder mystery on an Indian Reservation in the bitter cold.  Nothing we haven’t seen before.  Actually, the rape didn’t make sense and the aura surrounding this movie was sad and depressing.  I didn’t get a profound message or a warm fuzzy feeling upon the resolution of the crime.  It seemed as though all the characters had a sad background, which didn’t help to cheer things up any.  It wasn’t a bad film but I wouldn’t recommend it to anyone who is looking for a pick-me-up experience.  Wind River was well acted and unpredictable as far as “who done it” goes. 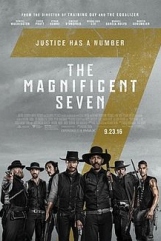 The Magnificent Seven reminded me a lot of True Grit. Who better than Denzel Washington as Sam Chisolm to pull off the lead character as a sharp shooter and warrant officer with the monumental task of taking out an evil, greedy villain like corrupt industrialist, Bartholomew Bogue (Peter Sarsgaard).  The Magnificent Seven takes place in 1879 and focuses on a gold mining town called Rose Creek.  The town, filled with regular GOD fearing folk, is overpowered by Bogue and many of the locals are slaughtered, including Matthew Cullen (Matt Bomer) who tried to stand up to Bogue.  After the slaughter, Matthew’s wife, Emma Cullen (Haley Bennett) along with a friend, Teddy Q (Luke Grimes) leave town in search of someone who can help stop Bogue and return Rose Creek back to the people.

After the Magnificent Seven arrive in Rose Creek, a gunfight with Bogue’s enforcer McCann (Cam Gigandet) ensues.  The Seven manage to win and sends a warning and challenges Bogue to return and fight or simply leave the town. As usual, there’s much more to this story but I’m minimizing spoilers, so I can say no more.  This was a fairly good western or what my mom use to call a “shoot em up”.  This remake of the 1960 version of The Magnificent Seven brings nothing new or earth shattering to the plate, but is very entertaining and well acted.