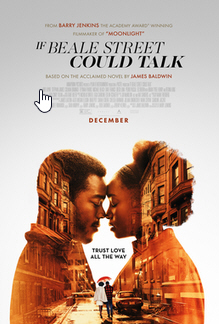 If Beale Street Could Talk is a romantic drama directed and written by Barry Jenkins, based on James Baldwin’s 1969 novel of the same name. It follows a young African-American woman who, with her family’s support, seeks to clear the name of her wrongly charged lover and prove his innocence before the birth of their child. There’s been lots of marketing of this movie, beware of over zealous advertising!  Still, I liked the film.

Clementine “Tish” Rivers (KiKi Layne) and Alonzo “Fonny” Hunt (Stephan James) have been friends their entire lives. As children, they did everything together, from taking baths to playing in the streets.  As adults, they enter a romantic relationship together and hold a bond between them that can’t be broken. After deciding to get married, they struggle to find a place to live as most landlords refuse to rent apartments to black people. Eventually they found a place in a warehouse that is in the process of being converted to an apartment building. Levy (Dave Franco), the Jewish landlord, agrees to rent it to them at a reasonable rate due to the fact that he enjoys seeing couples in love, regardless of their race.

One night, when Tish is shopping at a predominately White grocery store, she is harassed by a White man. When he begins to assault her, Fonny physically throws the man out of the store.  Officer Bell (Ed Skrein), who was nearby witnesses the incident but because of his racist background, attempts to arrest Fonny.  Bell reluctantly lets Fonny go when the lady who runs the grocery store vouches for the couple.  Soon after the incident, Fonny is arrested for raping a Hispanic woman, despite the fact that it would have been virtually impossible for Fonny to travel from the scene of the crime to the apartment where he was arrested. The case against Fonny is considered strong due to Officer Bell’s testimony, who says the he saw Fonny fleeing the scene plus Victoria Rogers (Emily Rios), the victim, picks him out of a line-up then disappears after identifying Fonny as her rapist. Tish, as well as Fonny’s friend, Daniel Carty (Brian Tyree Henry), were with Fonny and would be his alibi at the time of the rape, but their testimony isn’t considered reliable due to Tish’s romantic relationship with Fonny, and Daniel’s previous conviction for grand theft auto (despite his claim to not even know how to drive a car).

While the film is dealing with the most delicate of matters, it doesn’t give any closure to the story. If Beale Street could Talk opens at the apartment where the Rivers family live. A routine family dinner is taking place, showing the closeness of the family and their status in the community. Learning of Tish’s pregnancy, they decide to invite Fonny’s family over to share the news. The scene gets down right hilarious as insults and accusations fly between the two families. Tish’s mother, Sharon Rivers (Regina King) has a way of showing her feelings through a series of facial expressions that would scare off most but then speaks in the most kind and soft voice that would make most melt. Tish’s father, Joseph Rivers (Coleman Domingo) is funny and supportive. Their story is heart felt and is worthy of anger directed at a tiresome racial problem that makes no sense. The saddest part, is we are still experiencing racism at the highest level and still we struggle to rise above it, tell our stories and suffer in hopes the problem ends before the world perishes. Hate is a terrible thing and we could achieve so much more without it. I enjoyed If Beale Street Could Talk, I just think it was a little over marketed.  Despite the appearance of a low budget the performances were quite believable, the story has much more to offer so Check it Out! 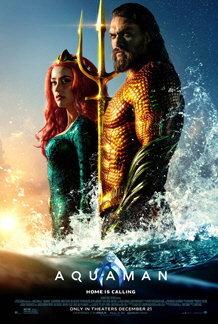 Aquaman is a superhero film based on the DC Comics character of the same name and distributed by Warner Bros. Pictures. It is the sixth installment in the DC Extended Universe (DCEU). Directed by James Wan, with a screenplay by David Leslie Johnson-McGoldrick and Will Beall, from a story by Geoff Johns, Wan and Beall. I am addicted to most superhero movies but had not really seen a full featured film about Aquaman, since there were none.  It is the third live-action theatrical film featuring Aquaman, following Batman v Superman: Dawn of Justice (2016) and Justice League (2017), and the first full-length feature film centered around the character.  I was not disappointed and the stellar cast gets a thumbs up!

Aquaman/Arthur Curry (Jason Momoa), the heir to the underwater kingdom of Atlantis, must step forward to lead his people against his half-brother, Orm (Patrick Wilson), who seeks to unite the seven underwater kingdoms against the surface world. In 1985 Maine, lighthouse keeper Thomas Curry (Temuera Morrison) rescues Atlanna (Nicole Kidman), the princess of the underwater nation of Atlantis, during a storm. They eventually fall in love and have a son named Arthur, who is born with the power to communicate with marine lifeforms. Atlanna is forced to abandon her family and return to Atlantis, entrusting her loyal advisor, Nuidis Vulko (Willem Dafoe) the mission of training Arthur. Under Nuidis’ guidance, Arthur becomes a skilled warrior but is rejected by the Atlanteans for being a half-breed and ultimately leaves Atlantis behind.

One year after Steppenwolf’s invasion, Arthur confronts a group of pirates attempting to hijack a Russian Naval nuclear submarine. Their leader, Jesse Kane (Michael Beach), dies during the confrontation while his son, David Kane/Black Manta (Yahya Abdul-Mateen II), vows revenge. David later targets Atlantis at the behest of Orm, Arthur’s younger half-brother and Atlantis’ king who uses the attack as a pretext to declare war on the surface. King Nereus of Xebel (Dolph Lundgren) swears allegiance to Orm’s cause, but his daughter Mera (Amber Heard), who has been betrothed to Orm, refuses to aid them and journeys to the surface to ask Arthur for help, earning his trust by saving Thomas from a tidal wave sent by Orm. Arthur reluctantly accompanies Mera to a rendezvous with Nuidis, who urges Arthur to find the Trident of Atlan, a magic artifact that once belonged to Atlantis’ first ruler in order to reclaim his rightful place as king. They are ambushed by Orm’s men and Mera and Nuidis escape without having been seen, while Arthur is captured.

Orm visits Arthur while he’s in captivity and announces that their mother, Atlanna was executed for the crime of having a half-breed son, blaming Arthur and the surface for her death. He offers Arthur an opportunity to leave forever, but Arthur instead challenges him to a duel in the ring of fire/underwater lava. Orm gains the upper hand and nearly kills Arthur before Mera rescues him. Together, Arthur and Mera journey to the Sahara desert where the trident was forged and unlock a holographic message that leads them to Sicily, Italy, where they retrieve the trident’s coordinates.

Meanwhile, Orm provides David with a prototype Atlantean battle suit to kill Arthur, imprisons Nuidis upon learning of his betrayal, and coerces the remaining kingdoms of Atlantis to pledge their allegiance to him and his campaign against the surface.  After modifying Orm’s technology, a fully-armored David rechristens himself as Black Manta and ambushes Arthur and Mera in Sicily, injuring Arthur before being thrown off a cliff.  Mera nurses Arthur’s wounds as they journey to the trident’s whereabouts, and encourages him to embrace his destiny as a hero.

Wow, the first full length feature of Aquaman is fabulous!  Talk about eye candy, Jason Momoa is absolutely gorgeous and has turned out to be a fantastic actor.  If you thought he was good in “Game of Thrones”, you’ll love him as Aquaman.  I thought the movie was exciting and the special effects were out of this world.  Too bad these types of movies are not acknowledged for Oscars.  All the hard work that goes into the making of a movie like Aquaman should be honored.  There is lots more story to embrace here.  See how this fantasy comes together with surprises, twist and turns plus an ending you will love.  Aside from being a little long, I have nothing negative to say about this movie, it’s definitely worth your time and money to see it — Check Aquaman Out!