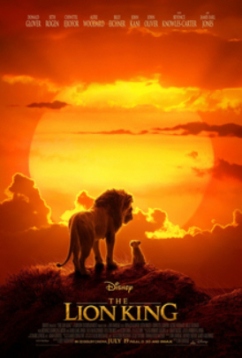 The Lion King is a computer-animated musical directed and produced by Jon Favreau, written by Jeff Nathanson, and produced by Walt Disney Pictures. It is a photorealistic computer-animated remake of Disney’s traditionally animated 1994 film of the same name. The plot follows Simba, a young lion who must embrace his role as the rightful king of his native land following the murder of his father, Mufasa, at the hands of his uncle, Scar. As with Jungle Book, the CGI characters were spectacular.  There was very little difference in the story, if any, from the original 1994 animated film. I was glad I went to see Lion King in this format.

In the Pride Lands of Africa, in a place called Pride Rock, lived King Mufasa, Queen Sarabi and their pride of lions who ruled over the animal kingdom. Mufasa’s and Sarabi’s newborn son, Simba, is presented to the gathering animals by Rafiki, the mandrill who is the kingdom’s shaman and advisor. As Simba grows older, Mufasa shows him the Pride Lands and explains the responsibilities of kingship as well as the “circle of life”, which connects all living things.

Mufasa’s younger brother, Scar, covets the throne and plots to eliminate Mufasa and Simba so he can rule the kingdom,  as the new king. He tricks Simba and his best friend Nala (to whom it is expected Simba will marry) into exploring a forbidden elephants’ graveyard, where they are attacked by spotted hyenas led by Shenzi, Kamari, and Azizi. Mufasa is alerted about the incident by his majordomo, the hornbill Zazu, and rescues the cubs. Though upset with Simba, Mufasa forgives him and explains that the great kings of the past watch over them from the night sky, from which he will one day watch over Simba. Meanwhile, Scar visits the hyenas and manages to convince them to help him overthrow Mufasa in exchange for hunting rights in the Pride Lands.

Meanwhile, Scar sets a trap for his brother and nephew, luring Simba into a gorge and having the hyenas drive a large herd of wildebeest into a stampede that will trample him. In order for Scar’s plan to work, he informs Mufasa of Simba’s peril, knowing that the king will rush to save his son.

The Lion King is a classic that most people have seen.  The reason to see this version is the CGI technology that makes the environment and animals of The Lion King seem almost real.  In this version, the plot focuses more on the life of Simba rather than his father, Mufasa.  Simba runs into new and different characters and learns new and different ways to eat and survive.  When Simba was finally pulled back into his reality, he resisted but succumbed to his basic foundation, which included the teachings of his father.  I thought The Lion King was beautifully told with special effects that were out of this world.  I am excited about future endeavors pertaining to picture shows.  The Lion King has grossed $1.4 billion worldwide, becoming the highest-grossing animated film, overtaking Frozen, as well as the second highest-grossing film of 2019 and 9th highest of all-time. It received mixed reviews, with praise for its visual effects, music, and vocal performances (particularly Rogen and Eichner) but criticism for its lack of facial emotion on the characters, with many describing it as “soulless” compared to the original film. I think, without a doubt, The Lion King is definitely worth seeing on the big screen.  Check It Out!

Listed below, is a list of celebrity voices that brought “The Lion King” to life:

Simba (Donald Glover):
A lion who is the crown prince of the Pride Lands.
Young Simba (JD McCrary)

Pumbaa (Seth Rogen:
A slow-witted common warthog who befriends and adopts a young Simba after he runs away from home.

Scar (Chiwetel Ejiofor):
The treacherous brother of Mufasa, the brother-in-law of Sarabi and the uncle of Simba who seeks to take the mantle of king of the Pride Lands.

Timon (Billy Eichner):
A wise-cracking meerkat who befriends and adopts a young Simba after he runs away from home.

Rafiki (John Kani):
A wise mandrill who serves as the shaman of the Pride Lands, and a close friend of Mufasa’s. Likening his role to that of a grandfather.

Zazu (John Oliver):
A red-billed hornbill who is the majordomo (someone who makes arrangements for another) to the King of the Pride Lands.

Mufasa (James Earl Jones):
The King of the Pride Lands, Sarabi’s husband and the father of Simba. Jones reprises his role from the original 1994 animated film.

(Amy Sedaris), (Chance the Rapper) and (Josh McCrary):
voice a guinea fowl, a bush baby, and an elephant shrew, respectively.