When I rate a movie 10 or close to a ten, it means I found nothing wrong with the movie.  The acting, the plot, the ending, special effects, substance and the message are taken into consideration.  I take off 1/2 to 1 whole point for each of the above categories I feel the director didn’t get right.  Fury is a near perfect movie.  I took off a half point because I felt the ending could have gone a tiny bit further.  Fury tells a story that is so profound it had me in tears.  Imagine a young christian boy thrown in the middle of WW2.  Of course he has never killed anyone but now he being told to kill as many Nazi’s as he can, without batting an eye.  This kid has to learn to be a killing machine in a matter of minutes.  To survive, he has to comply with his leader’s commands, despite his feelings.  On the other side of the coin, without the guidance and hand holding of the leader, they could all be dead in seconds.  Any hesitation on the part of the kid could end it all.  Norman Ellison played by Logan Lerman is so green on so many levels that he’s no use to the troops, but in the end, he emerges as a hero.  Fury tells it like it is when we had christian values — many of the soldiers survived believing those values.  Brad Pitt (Don “Wardaddy” ) plays as an Army Sergeant who commands a Sherman tank filled with 5 soldiers and does a fine job of leading them to the finish line.  Fury is a very good movie that sends a very good message under the direction of David Ayer.  You can’t go wrong with this movie, you’ll get your money’s worth! 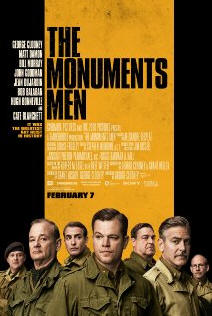 The Monuments Men is a true story that takes place during WW2 and covers a very important era in history.  However, I am sorry to report that this film is not what one would expect.  It was a little confusing in the beginning, as I felt the director (George Clooney) assumed we knew military lingo and protocol proceedings.  It was as if the characters were carrying on their very own private conversations during an ambiguous opening.  The plan was to retrieve art stolen by the Nazis and return it to the rightful owners.  The plan was hard for the audience and, surprisingly, the military to understand.  I tried to follow along but soon became lost.  Midway through, The Monuments Men started to come to life.  I feel this was a noble gesture on the part of the US Military and was carried out to the best of their ability.  The Nazi’s still managed to destroy millions of paintings rather than allow the owners to repossess them.

For some reason, George Cloony, who plays Frank Stokes, is hard to take seriously.  He always seems to have a humorous persona. Bill Murray as Richard Campbell and Matt Damon as James Granger were brilliant as was John Goodman, who played Walter Garfield and Bob Balaban who played Preston Salvatz.  Cate Blanchett played Claire Simone/Rose Valland, the real life curator of the Jeu De Paume museum in Paris, France.  Rose documented all the paintings  that came through the museum and their rightful owners.  You can imagine how valuable this information became for this “special tasked platoon” known as The Monuments Men.

I don’t think this was a terrible movie but it wasn’t a good one.  Aside from the confusing lead-in, I found The Monuments Men a bit lack luster and at times, a bit boring.  George Clooney and Matt Damon seemed to dominate most scenes leaving Murray and Goodman overshadowed and under used.  Overall, once you get past all the unsettleing beginnings, it finally gets much better.  The Monuments Men is now on DVD and is worth an otherwise unfruitful evening.