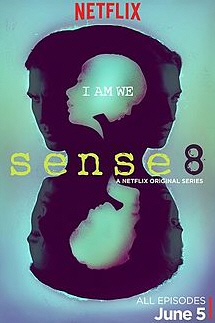 First, let me say Sense8 isn’t for everyone. As a matter of fact, if you can get through 1 and a half episodes without giving it the kiss of death, then it’s probably for you. Sense8 starts off in a sea of confusion but once you are able to unravel the pieces, OMG and wow, wow, wow. It is one of the most brilliant series in the Science Fiction category I’ve seen, bar none. Kudos to the Warchowski duel and Michael Straczynski, there’s no stopping their talent. 8 people from around the world labeled “Sensates“ are able to connect mentally and share each other’s lives, thoughts and experiences without being seen by anyone outside of their shared cluster. Their adventure is “an experience you’ll not soon forget”, is an understatement. The series was filmed in 9 cities all over the world.  They included the following:   Chicago, San Francisco, London, Berlin, Seoul, Reykjavík, Mexico City, Nairobi and Mumbai. All 12 episodes of season 1 became available for streaming on Netflix June 5, 2015.  On August 8, 2015, Netflix announced that it had renewed the show for a second season.

The first episode focuses on the initial connection of all 8 of these sensates, which happens when a woman named Angelica, who is being hunted by a mysterious adversary named Whispers, kills herself to avoid capture. Before she does this, she uses her unique abilities to awaken the powers of 8 other people around the world, connecting these “sensates” into a cluster. The 8 begin to experience the beginnings of their psychic connections with each other via hearing what the others hear and seeing what the others see.  Watching these sensates helping one another and taking on each other’s task in crisis is amazing.

Capheus “Van Damme” Onyango (Aml Ameen), is a matatu driver in Nairobi. Capheus is a passionate fan of Jean-Claude Van Damme and is trying to earn money to buy AIDS medicine for his mother.
Young Capheus (Gabriel Ouma).

Kala Dandekar, (Tina Desai) is a university-educated pharmacist and devout Hindu in Mumbai who is engaged to marry a man she does not love.
Young Kala (Yashvi Puneet Nagar).

Lito Rodriguez, (Miguel Ángel Silvestre) an actor (still in the closet) who has a Basque background living in Mexico City with his lover, Hernando.

Nomi Marks, (Jamie Clayton) a transgender woman “hacktivist” and blogger who lives in San Francisco with her girlfriend, Amanita. Nomi was born Michael but changed her name to Nomi, which stands for “Know Me”.
Young Nomi (John Babbo) (then called Michael).

Riley Blue née Gunnarsdóttir, (Tuppence Middleton) is an Icelandic DJ who is living in London while trying to escape a troubled past.
Young Riley Gunnarsdóttir (Katrin Sara Olafsdottir).

Sun Bak, (Doona Bae) is the daughter of a powerful Seoul businessman and a burgeoning star in the underground kickboxing world who is plagued by a corrupt sibbling.
Young Sun (Jane Lee).

Will Gorski, (Brian J. Smith) a Chicago police officer haunted by an unsolved murder from his childhood.
Young Will Gorski (Maxwell Jenkins).

Wolfgang Bogdanow, (Max Riemelt) a Berlin locksmith and safe-cracker who has unresolved issues with his late father and participates in organized crime.
Young Wolfgang (Lenius Jung).

“Whispers”, (Terrence Mann) a sensate who turned against his own kind and who leads an organization determined to neutralize sensates.

Jonas Maliki, (Naveen Andrews) a sensate from a different cluster who wants to help the newly-born cluster of sensates.

Angelica “Angel” Turing, (Daryl Hannah) a sensate from an older.

Felix Bernner, (Maximilian Mauff) is Wolfgang’s best friend and partner in crime. He is not a sensate.
young Felix (Chiron Elias Krase).

Hernando Fuentes (Alfonso Herrera) is Lito Rodriguez’s lover and a professor of art.  He is not a sensate.

Overall, I have never been so mesmerized and captivated over a series.  Sense8 airs on Netflix and season 1 is divided among 12 episodes.  Season 2 is out and is divided among 11  episodes and even better than season 1.  Check it out, but be prepared to binge watch.

“13 Reasons Why” is not a movie but instead a 13 episode series streaming on Netflix about a young teenager who enters high school with all the expectations of a student with their whole life ahead of them. The series focuses on a female who happens to be very pretty with no visible sign of deformities, always trendily fashioned and no brain malfunctions. In other words, she seems quite normal. For some reason, she was taken advantaged of via a form of bullying over the years, which caused her reputation to take a roller coaster ride during her time in high school while her self esteem plummeted as well. After committing suicide, 7 double sided tapes, that she made for the students who contributed to her demise were allocated for each one, which made for a brilliant series everyone should see.

The series starts with Clay Jensen (Dylan Minnette), who returns home from school and finds a mysterious box of seven double sided cassette tapes laying on his porch. The tapes are recorded by Hannah Baker (Katherine Langford), his classmate and unrequited love, who tragically committed suicide two weeks earlier.  These 7 double sided tapes reveal an emotional audio diary, detailing the 13 reasons why she decided to end her life. With each package of tapes, Hannah instructed the following: each person who receives a package is one of the reasons why I killed myself, so after each person has completed listening to the tapes, they must pass the package on to the next person. If anyone decides to break the chain, a separate set of tapes will be released to the public.

NOTE: Each tape is addressed to a select person in her school and details their involvement in her inevitable suicide. Responsibility for the separate set of tapes was given to Tony Padilla (Christian Navarro),  who is Clay’s best friend.

These are the school members who Hannah held responsible:

If you subscribe to Netflix, you merely have to choose “13 Reasons Why” to experience this incredible story that could change the way one looks at what bullying can cause.  This is a life changing look at a very serious problem.  Many schools are viewing the series as a  possible standard for their students.  I think it’s a must see for everyone! 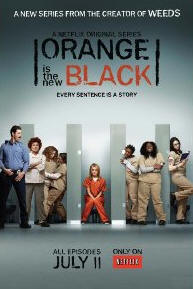 Out of curiosity I started watching Orange is the New Black.  I was never quite sure why the star, Piper Chapman (played by Taylor Schilling) landed in jail in the first place but I forged on.  What I got from it all is a college grad, Piper, who is engaged to a great guy, (Larry Bloom played by Jason Biggs) who is also a college grad landed in jail over the transport of money made from selling weed.  It’s still fuzzy but I think her girlfriend was selling the weed and got caught and named Piper as an accomplice.  This may not be exactly how it went down but it’s close.  The two women were actually lovers before Piper found she preferred men.  The two of them ended up in the same institution but not as friends.  The goings on in a jail of all women with male officers reigning over them is quite interesting.  I’m not sure this is realistic but it looks right.  I just have a problem with how Piper ended up in this situation.  BTW: Her fiance (who’s father is the judge who presided over Piper’s trial) sticks by her 100% and awaits her sentence of 15 months to be over so they can start their new live together.  If you are entertained by harsh language, highly personal situations, sex and some mean spirited folks, you are a candidate for this series.  It’s not the best jail series I’ve ever seen but it does hold your interest and is, at best, entertaining.  You can only see this on Netflix.