Tag Archives: NEWS OF THE WORLD

News of the World is a Western drama, co-written and directed by Paul Greengrass. The movie is based on the 2016 novel of the same name by Paulette Jiles. The film follows a Civil War veteran who must return a young girl who was stolen by Native Americans as an infant to her last remaining family, over 400 miles away. The trailers were quite interesting and so was the movie.

In 1870, retired Captain Jefferson Kyle Kidd (Tom Hanks) a former member of the Confederate Infantry now makes a living traveling from town to town keeping folks informed of the latest news as they gather to listen as he reads from local newspapers for 10¢ a person. One day while traveling to the next town, Captain Kidd spots an overturned wagon.  Upon investigation, he encounters a lynched Black man and a wild, young white, 10-year-old girl.  Suspecting the two were probably traveling together, he realizes she is now alone.  The captain tries to communicate with the child but she doesn’t speak English.  He also notices she is dressed in Native American clothing yet she doesn’t look Indian.  Shortly the Union Army Patrol appears and suggests that Captain Kidd take the child to the next checkpoint in a nearby town, where he can present her paperwork to the union officials in charge. They will decide where she belongs and see to it that she is returned to her surviving family in Castroville, TX.

From here on, nothing goes as planned.  The two arrive at the Union checkpoint, Kidd is informed that the Bureau of Indian Affairs representative is on the reservation and will be unavailable for three months. Now Captain Kidd is faced with what to do with a child.  Meanwhile, he seeks shelter with a former Confederate infantryman, friend, and music teacher, Simon Boudlin (Ray McKinnon). As scheduled Captain Kidd reads the news and upon returning, makes a decision to accept responsibility for returning the girl himself. As the two set out they attempt to find common ground, but neither one has much success in communicating with the other. The child turns over her papers to Captain Kidd and he learns her name is Johanna Leonberger (Helena Zengel) who speaks Kiowa.  However, she doesn’t know the name Johanna as it is her German birth name, not the name she was given after being kidnapped (as an infant) by Indians, 9 years ago.  So she goes by the name Cicada, which Captain Kidd rejects.  This is further compounded at the next stop when Kidd is confronted by three ex-Confederate soldiers turned criminals who express an interest in purchasing Johanna from Kidd. He refuses, but the three men pursue, leading to a shootout in the wilderness during which Johanna and Kidd overcome obstacles to work together for self-preservation. 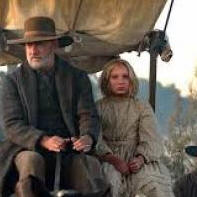 Throughout News of the World, various bad cowboys tried to take Johanna for sinister purposes.  These are not the only men the two encounter with a criminal agenda in mind. They also have to fight against acts of nature, water shortage, and no transportation, to name a few before reaching their destination, which presents another problem since Johanna is not in agreeance with this journey.  There are many obstacles in their way but their struggle forges a deep bond between the two. Their travel takes place in the state of texas, exclusively.  News of the World is a little slow but very entertaining.  The plot is brilliant and Tom Hanks and Helena Zengel will make believers out of you — fantastic performances by both actors.  Review aggregator website, Rotten Tomatoes reports that 87% of 190 reviews of the film were positive, with an average rating of 7.4/10. The website’s critic’s consensus reads: “News of the World takes a slow but absorbing ride down a comfortingly familiar Western trail, guided by Tom Hanks in peak paternal mode.”  News of the World airs on Prime Video, unfortunately, at this time it’s $19.99 to rent.  Check It Out!