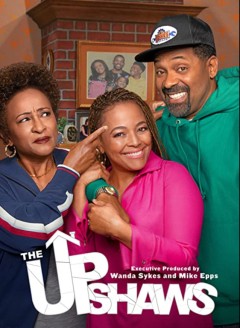 The Upshaws is a sitcom created by Regina Y. Hicks and Wanda Sykes. The two are expected to executive-produce alongside Mike Epps, Niles Kirchner, and Page Hurwitz. Push It Productions is the company involved with producing the series. I discovered this sitcom about a Black working-class family in Indiana, striving for a better life and a happy home while juggling everyday struggles. Since there are not many Black sitcoms on TV, I decided to give this one a shot at making me laugh — and laugh I did, abundantly.  I absolutely loved it!

The Upshaws follows Bennie Upshaw (Mike Epps), a charismatic car mechanic and owner of Bennie’s Garage. Bennie’s family consist of his wife, Regina Upshaw (Kim Fields), his daughter and youngest child, Maya Upshaw (Journey Christine),  his oldest daughter Aaliyah Upshaw (Kihali Spraggins), and his 0ldest son [who has a strained relationship with his father] Bernard Upshaw, Jr. (Jermelle Simon). Bernard Jr. says his father abandoned him then barely showed up when he was 16 years old. Lastly, Bennie’s adult son who he fathered outside of his marriage with Tasha Lewis (Gabrielle Dennis), Kevin Upshaw (Diamond Lyons). The cast also features his sarcastic sister-in-law, Lucretia Turner (Wanda Sykes), and his oldest friend who just got out of prison and is a practicing Christian, “Duck” (Page Kennedy).

There are 10 episodes in season 1:

Having grown up watching sitcoms from the 1970s and ’80s, Epps, who is perhaps best known for his work in the “Friday” and “Hangover” films, noticed a dearth of relatable sitcoms based on Black families and friend groups. When he approached Wanda Sykes with the basic premise of “The Upshaws” in mid-2018, he found that she had noticed the same thing. I think The Upshaws is a little different than the normal sitcoms I see about Black families and how they cope with the world and each other.  People seem to think that being Black means crime, poverty, and lack of education but that’s not the case.  The Upshaws show normal everyday problems within the family that don’t include crime.  The show is hilarious and gives us a good look at a family we can relate to. Epps said that at its core, “The Upshaws” is designed “to show the world that Black people enjoy life, too, and Black people are resilient.”

While “The Upshaws” is reminiscent of traditional family comedies, the creators also wanted the show to reflect life in the 21st century, navigating difficult conversations about love, marriage, and sexuality. Over the course of the debut season, one of the Upshaw’s comes out as gay to the rest of the family, a storyline that is of particular importance to the showrunners, who “know what it feels like to not be seen and represented,” Sykes said.

Review aggregator Rotten Tomatoes reported an approval rating of 63% based on 8 critic reviews, with an average rating of 7/10.  Netflix announced that “The Upshaws” has been renewed for a second season with 16 episodes and will be featured in two parts. Check It Out!