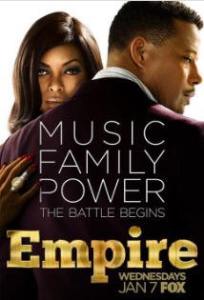 Terrence Howard who plays Lucious Lyon and Taraji P. Henson who plays Cookie Lyon, are among the huge cast of hip-hoppers, singers and actors that fuel this new series.  A secretly dying CEO of a successful record company is trying to set up his empire so that it runs smoothly and efficiently when he’s gone.  He is divorced from his wife, who just gotten out of prison and is the mother of Lucious’ 3 sons.  Tradition goes out the window when he decides to have his 3 sons Jamal (Jussie Smollett), Hakeem (Bryshere Gray), and Andre (Trai Byers) make a legitimate play for CEO of the company.  He favors one son over the other two but tries to keep that to himself.  His x is clever, demanding and ready for action claiming half of the firm.  Together they are wheeling and dealing So far, the acting is good and the plot is good.  After 2 episodes, I feel like I’ve been into Empire for years.  For me, that’s one of the signs of a good series.  Everything is not what meets the eye, as there are plenty of illegal dealings in the back office as well as right in front of the world to see.  Strong characters and much talent will keep this one afloat for while.  Stay tuned for more on this series as it progresses.  Empire currently airs on FOX.