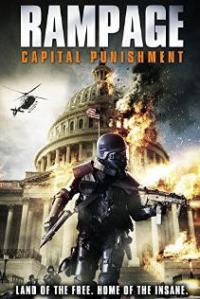 Rampage Capital Punishment not only  held my interest, it’s action and subject matter awakened me right out of a sleepy stupor.  It was exciting and suspenseful.  A disturbed man decides to get his political message across by killing over a 100 people, taking over a TV station, making what’s left of the employees hostages and broadcasting an interview between a known, local anchorman named Chip and himself.  While most of his message has merit, his methodology and human sacrifice was sickening and unwarranted.  Justifying his killing spree because “there’s too many people in the world” rendered his message void.  Brendan Fletcher plays Bill Williams,  a vigilante who is seeking vengeance on the rich,  has truly lost his mind.  His message of how this government is run was spot on.  There’s a lot of action and killing in this movie.  I saw it on Netflix, only to discover Rampage Capital Punishment is a sequel.  I will watch the first iteration called Rampage, critique it and post the results on Carol’s World.  The ending was particularly disturbing — however, I wouldn’t want to give anything away so you will have to see it for yourself.  I dare say, Rampage Capital Punishment is worth watching.

The Wolf of Wall Street (“TWOWS”) is based on the true story of Jordan Belfort and is among the best of the Wall Street sagas.  It is 1 minute shy of 3 hours long.  I didn’t find it the least bit boring or uninteresting.  In fact, it is a roller coaster of greed, dishonesty, crime, drugs and sex —  not that this is a good thing but it’s real.  Leo DiCaprio has fulfilled the role of a life time.  His character was somewhat similar to his role in the Great Gatsby, only bumped up 10 fold to round out his performance as an up and coming financial broker.  I haven’t seen the likes of “TWOWS” since Johnny Depp’s “Blow”.  Jonah Hill was equally as brilliant as Leo’s loyal side kick who will do anything to make a buck.  This movie shows us the real risk of investing in the stock market.  Of course all is not corrupt, but that’s something one needs to investigate before jumping in, feet first!

As an older person with patience and sense, I was disturbed by the fast paced craziness that exist with the young and greedy in this environment.  A large part of  The Wolf of Wall Street dealt with extreme, disturbing  behavior.  It took us through the biggest investment banking trading floors, selling stocks to the rich, all the way to a hole in the wall selling penny stocks to the poor, then back to trading with the rich.  It was all about the bottom line, MONEY!  The Wolf of Wall Street is a real eye opener that you won’t soon forget.  Martin Scorsese certainly produced a masterpiece that I think deserves  Oscar nods for best picture, best actor, best supporting actor and best director.  It’s a world wind of a movie.

***THERE ARE SOME SPOILERS***     In the real world, I hope our thinking never comes to the making of an Elysium.  Wealthy snobs vs everyone else.  Elysium is a man made space station where only the rich are allowed to live.  Mark (played by Matt Damon) is the only hope to achieving an equable life for all.  I wasn’t particularly fond of the ending and I felt a disconnect between Damon’s character and the audience.  I wanted the story to show more insight into the new future.  I don’t think Matt Damon fits the super hero profile for his character.  He seemed uncomfortable in this role which made me feel uncomfortable watching him.  He’s gotten a little wide and shots of him from behind gave off an elderly appearance.  His acting was very good, as usual but he seemed out of sorts and I also felt we were left hanging at the end which was designed to turn  him into a martyr as mankind was restored.

Jodie Foster was wicked as the Secretary of Defense.  But not even the great Jodie Foster could save this movie for me.  She plays a mean villain who would do anything to save Elysium.  Killing the young or old was done with ease and her character had a strong dislike for those beneath her.

I didn’t really like Elysium because it didn’t make me feel good and I wasn’t necessarily entertained.  None the less, it’s an interesting concept however,  I should have waited for DVD.