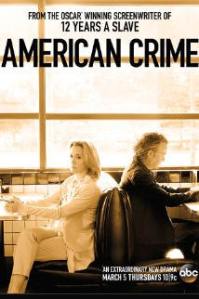 American Crime is focused on a crime committed against a married couple in their home.  The husband was killed and the wife beaten and possibly raped.  As she lies in a coma, an arrest is made.  This story gets pretty complicated as we learn more and more about the victims and those accused of the crime as well as the parents of the couple.  Felicity Huffman plays Barb Hanlon and is easy to dislike as she plays a prejudged parent with a cold heart and a vengeful agenda.  American Crime is racially and politically charged with a lot of truth and a lot of falsehoods.  Each episode does not stand on its own.  You have to follow the story in order to know what’s going on.   There are several families that make up this drama, the surviving victim and her parents Eve Carin (Penelope Ann Miller) and Tom Carin (W. Earl Brown),  the estranged parents of the dead victim, Barb Hanlon (Felicity Huffman) and Russ Skokie (Timothy Hutton), the Hispanic, single male parent/father Alonzo Gutiérrez (Benito Martinez), one of the accused and Alonzo’s son, Tony Gutiérrez (Johnny Oritz) and his daughter, Jennifer Gutiérrez (Gleendylis Inoa), Aliyah Shadeed (Regina King) the sister to another of the accused, Carter Nix (Elvis Nolasco) plus his Caucasian girlfriend, Aubry Taylor (Caitlin Gerard) and lastly, the actual guilty person who is also the witness and accuser, Hector Tontz (Richard Cabral).  The series looks like it will get better and better.  American Crime is a look into the justice system through the eyes of the victims as well as the guilty and accused.  Let’s see where this one goes.  So far it’s off to a somewhat, slow start.