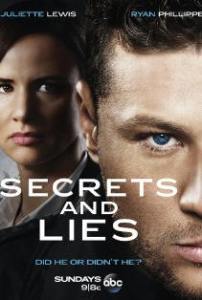 Juliette Lewis has come a long way from a wild, cold blooded killer in Natural Born Killers to conservative detective in charge of a murder investigation of a little boy, Tom Murphy (Aiden Malik) bludgeoned to death and left dead in the woods.  I couldn’t understand how Ben Crawford (Ryan Phillippe) could be blamed for the killing so I watched several episodes to determine if Secrets and Lies would end up in the 1013 file or go full steam ahead.  After 4 episodes, it’s beginning to wiggle it’s way out of harms way and into potential-ville.

A man (Ben) running his routine morning jog, discovers a little boys dead body in the woods.  He turns the body over, sees that his neighbor’s child, they call little Tommy, is dead.  He then runs home and calls 911.  Ben has 2 daughters Natalie and Abby Crawford played by Indiana Evans and Belle Shouse, respectively) and a wife, Christy Crawford (Kadee Strickland).  Eventually, Ben is suspected of the murder and soon learns someone is setting him up.  The investigation has a Columbo (Peter Falk) flavor as Detective Andrea Cornell (Juliette Lewis) makes an extraordinary amount of visits to Ben and Christy’s home.  I’m anxious to see this mini series move on.  A few profound secrets have already been revealed but if there are too many secrets, the audience will lose credibility with Secrets and Lies.  In my opinion, less is more!  The 5th and 6th episodes should be a real challenge.