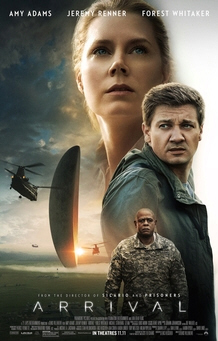 What a profound message at a time when we really need it. Arrival is spot on. Too bad it’s just a figment of someone’s imagination! This nation could use a shot of reality. Arrival delves into some pretty deep philosophies. Louise Banks (Amy Adams) a Linguist who speaks several languages has a doctorate and teaches at a near by university. Having been called upon in the past to service her country, Louise continues to have top security clearance when she’s called again for this new and very different assignment.

When 12 alien vessels land across the earth settling in several countries, without explanation, Louise is called on to lead a special team of military personnel to try and communicate with the aliens who landed in Montana, as to why they are here. Senior US Army Colonel Weber (Forest Whitaker) pays her a visit to explain just enough information to get her on board.  After turning him down, he leaves to pursue another linguist but soon returns.  Every country has their own agenda on how to deal with these alien invaders and after a while, block communications between themselves and all other nations. As a result, there is no sharing of each others progress or future plans.  Over time, several attempts are made to teach our language to the aliens through a glass partition.  For the purpose of  backup and a secondary approach, a second team headed by an equally distinguished Theoretical Physicist, Ian Donnelly (Jeremy Renner) was called to work side by side with Dr. Louise Banks  Together our government hoped to make headway into establishing answers to our many questions. The Military named the alien ships “shells”.  The plan to learn and  share information between us and the aliens (called “Heptapods”, because of their structure) wasn’t working as the Heptapods used a written language, based on time, that proved to be extremely complicated.

Director, Denis Villeneuve did a fantastic job building up to an ending that was so emotional and intense that it brought tears to my eyes.  The key to Arrival is togetherness.  Without spoiling a great work of art, I cannot say any more about the movie, except go see it.  Keep your eyes and ears glued on every word and every scene.  There’s not a lot of fast paced action or destruction or even special effects.  Arrival is purely a lesson in being compassionate human beings — something we seem to have forgotten.  I was moved and entertained as well.