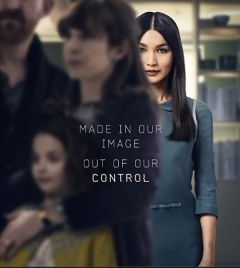 Humans is a science fiction television series.  Written by the British team Sam Vincent and Jonathan Brackley and is based on the Swedish science fiction drama Real Humans, the series explores the themes of artificial intelligence and robotics, focusing on the social, cultural, and psychological impact of the invention of anthropomorphic robots called “synths”. The series was produced as a joint effort by AMC in the United States as well as Channel 4 and Kudos in the United Kingdom.

Humans start out with a couple of men wheeling, what looks like mannequins, into a warehouse filled with row after row of synth, which is short for synthetic and is the name given to  AI’s, which are sold as household maids.  AI is an acronym for artificial intelligence. The mannequins are shown to be unlifelike, wearing nothing more than underpants (men and women alike). The next scene takes us to the Hawkins family, which consists of husband Joe Hawkins (Tom-Goodman-Hill), wife Laura Hawkins (Katherine Parkerson), oldest daughter Mattie Hawkins (Lucy Carless), son Toby Hawkins (Theo Stevenson), and youngest daughter Sophie Hawkins (Pixie Davies). Joe is trying to manage his home, children, and a wife who is overworked as a lawyer.  Overwhelmed with his overflowing plate, Joe goes shopping and purchases a synth.  When his wife returns home after five days away, they argue because Laura is opposed to having a synth because of past circumstances.

Five weeks earlier, five synths who are low on charge, are traveling as they look for a place to settle, charge-up, and regroup.  A couple of synth poachers kidnap synth, Anita/Mia (Gemma Chan), and deliver her to a scientist named Hobb (Danny Web).  Leo Elster (Colin Morgan) and synth Max Elster (Ivanno Jeremiah) conduct a fierce search for her, to no avail.  synth Fred Elster (Sope Dirisu) and synth Niska (Emily Berrington) also befell to the same fate.  So far, Anita is the only one who hasn’t been in touch with Leo and Max, causing Max to believe the two have been destroyed or reprogramed.

I really liked Humans, the subject was a lot like “Better Than Us” except the synths are motivated by different circumstances. George Millican (William Hurt) as a retired artificial intelligence researcher and widower who suffers memory loss and physical disabilities is a special and brilliant addition to the series. George forms a special bond with his malfunctioning and outdated caregiver, synth Odi (Will Tudor).   The synth goes into hiding, some are reprogrammed, some are discovered, some take on proving they are more human than the world thinks, and some live to fight the good fight.  The liaison between the synth and the life they are fighting to live is Humans.  There are a host of characters introduced into the series with many plots and sub-plots.  You’ll find Humans exciting and somewhat emotional.  Eight episodes were produced for the first series which aired between 14 June and 2 August 2015. The second eight-episode series was broadcast in the UK between 30 October and 18 December 2016. A third series was commissioned in March 2017 and aired eight episodes between 17 May and 5 July 2018. In May 2019, Channel 4 announced that the series had been canceled. The series is now streaming on Prime Video. If you like fantasy and science fiction, you will probably love Humans.  I recommend you binge-watch this one — Check It Out!