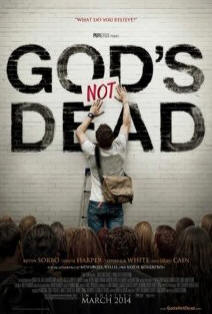 God’s Not Dead is an amazing movie on every level.  I had heard really good things about this movie.  After seeing it, I have a few good things to say myself.  I’ve seen a lot of Christian based movies but none like this one.  God’s not Dead is based on true events surrounding abusive tactics used on some college campuses.  A student, Josh Wheaton played by Shane Harper, is challenged in his philosophy class to prove that God is not dead or fail the course.  The class is being taught by a dogmatic and argumentative atheist professor played by Kevin Sorbo.  The student, Josh,  goes in depth, refuting every well know philosopher’s findings.  Josh is put down by his family and girlfriend and urged to sign a required paper, put to the class, that states God is Dead.  There are several stories being told that nicely comes together in the end.  Willie Robinson and his wife from Duck Dynasty had a small but significant part in the movie.   As a side note, David A.R. White played Reverend Dave who looks and reminds me so much of Keith Urban that I had a hard time focusing on him as a reverend.  You will definitely shed a tear or two, as God’s not Dead is packed with emotional stories from start to finish.  From the music to the acting, God’s Not Dead is very much alive and a winner in my book.

Crisis is about the abduction of a school bus fully loaded with children, including the President of the United State’s son, while on a field trip.  The children are taken to a rather large and beautiful building where they are held captive.  The kidnappers make demands of the parents that include murder, extortion, resetting of satellites and much more.  The theme is “what will you do for your children”.  One newly trained Secret Service Agent, played by Lance Gross, was able to rescue one student and kill one of the captors.  Dermot Mulroney plays the master mind behind the whole plan and is also the father of one of the abducted students.

This series has the potential to bomb because the concept is absolutely ridiculous.  It’s saving grace is it’s so exciting and well acted that it may forge on to stardom.  There’s lots of drama and twist and turns amid the parents and the students.  One of the CIA agents working on the case is the mother of one of the students, only the student doesn’t know the women she calls mom is really her aunt.  This is so new, I can’t say much.  Watch it for yourself — it’s not bad! This series currently airs on NBC. Unfortunately, Crisis has been cancelled!

Tagged children, dermot mulroney, extortion, lance gross, murder, satellites, secret service agent, student, what will you do for your children