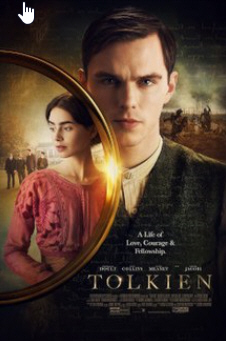 Tolkien is a biographical drama directed by Dome Karukoski and written by David Gleeson and Stephen Beresford. The film is about the early life of English professor J. R. R. Tolkien, author of The Hobbit and The Lord of the Rings, as well as other notable academic works. Tolkien is distributed by Walt Disney Studios Motion Pictures under the Fox Searchlight Pictures banner, making it the first film released by Searchlight after an acquisition by Disney.  I wasn’t sure about Tolkien — I thought it might be a documentary, but it isn’t. The film was well done and I’m glad I got to see it.

Tolkien opens with young J. R. R. Tolkien (Harry Gilby) lying in a field of leaves fantasizing about two fully armored men on their horses, fighting amidst fire, with spears drawn. Reality sets in and he awakens as an officer in WWI who is badly in need of medical assistance.  He then drifts back to his childhood, daydreaming; he is on break after playing rugby with friends and his younger brother Hilary (Guillermo Bedward), older Hilary Tolkien (James MacCallum). JRR and his brother are called in from Rugby by their mother Mabel (Laura Donnelly). With Father Francis (Colm Meaney) in attendance, the boys are told to start packing because “with your father gone, I have to go to work in order to support us”. Currently, the house they were living in was too expensive to maintain now that Mabel is widowed. JRR is so upset at the news of their moving, he runs out of the house with his mother trailing behind.  She catches him, they embrace and the scene changes to their new environment, a boarding house with several rooms.  The scene changes again with a woman reading a fantasy story to the boys about a dragon.

An older J. R. R. Tolkien’s (Nicholas Hault) life experience in WWI crossed with his fantasy world of magical people, places, animals and more, is all crossed with his present and future adventures in Oxford college which would be somewhat complicated, if not for director Dome Karukoski, who does a brilliant job of separating JRR’s youth, fantasies and years as an officer in WWI from his days as a young student at Oxford. Kudos to Dome for his foresight.

One day when young JRR returns home from school, he finds his mother dead sitting in the kitchen chair.  Now orphaned, and with the help of Father Francis, JRR. attends King Edward’s school. While there, he befriends a group of fellow artists and writers, with whom he finds inspiration and courage. Their bond of fellowship grows with the years, as they experience life together. Again with help from Father Francis, JRR attends Oxford College on scholarship.  JRR’s friends are Christopher Wiseman (Tom Glynn-Carney), a man who is socially adept beyond his years and the class clown. He spots Tolkien’s potential and invites him into his social group. Young Christopher Wiseman (Ty Tennant);  Geoffrey Bache Smith (Anthony Boyle), a poet who was very close to Tolkien.   Young Geoffrey Bache Smith (Adam Bregman); Robert Q. Gilson (Patrick Gibson) — Young Robert Q. Gilson (Albie Marber).  Soon after an alliance was formed and while attending King Edward’s School, the boys formed a secret society called T. C. B. S. (Tea Club and Barrovian Society).

Meanwhile, Tolkien meets young Edith Bratt, (Mimi Keene) — older Edith Bratt (Lily Collins), with whom he falls in love. Edith lives in the same boarding house as JRR and plays piano for the owner of the house, Mrs. Faulkner (Pam Ferris).  Also orphaned, Edith grows close to JRR, as they sneak out to restaurants, residuals, picnics and a trip to meet the boys of T.C.B.S. Eventually, Edith also served as a muse for JRR and was the inspiration for the fictional characters Lúthien Tinúviel and Arwen Evenstar. But when World War I breaks out, Tolkien’s relationships with his friends and Edith are tested.

J. R. R. Tolkien’s accomplishments are stunning.  He wrote Lord of the Rings, The hobbits and The Silmarillion to name a few.  He learned to read at the age of four and invented real languages such as Nevbosh and Naffarin.  He was close friends with C. S. Lewis and both were members of the Inklings, a literary society, as well as an artist who liked to draw trees and landscapes.  JRR was also named “Commander of the Order of the British Empire” by Queen Elizabeth II in March of 1972 and was 2nd Lieutenant in WWI. He was also listed sixth on a list of “the 50 greatest British writers since 1945”.  Forbes ranked him the fifth top-earning “dead celebrity” in 2009.  I think the film, Tolkien, is a worthy piece of art that anyone can enjoy.  There is so much to this movie, as Tolkien’s life was filled with more accomplishments than most.  From his tumultuous courtship with Edith Bratt, the outbreak of WWI and being orphaned by the age of 12, there wasn’t much to make up for this film to be entertaining.  I highly recommend Tolkien.  Check it Out!