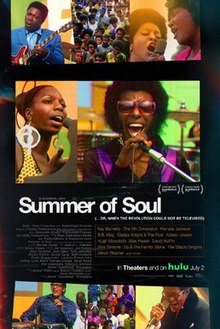 Summer of Soul (…Or, When the Revolution Could Not Be Televised) is a documentary film directed by Ahmir “Questlove” Thompson about the 1969 Harlem Cultural Festival. The documentary examines the 1969 Harlem Cultural Festival, which was held at Mount Morris Park (now Marcus Garvey Park) in Harlem and lasted for six weeks. Despite having a large attendance and performers such as Stevie Wonder, Mahalia Jackson, Nina Simone, The 5th Dimension, The Staple Singers, Gladys Knight & the Pips, Blinky Williams, Sly and the Family Stone, and The Chambers Brothers, the festival was seen as obscure in pop culture, something that the documentarians investigate. This six-day Cultural Festival was historical and is unforgettable. This post is being brought to you, compliments of Wikipedia.

At the request of the festival organizer and host Tony Lawrence, television producer Hal Tulchin recorded about forty hours of footage of the 1969 Harlem Cultural Festival on videotape, excerpts from which were originally broadcast on two one-hour TV specials in July and September 1969 by CBS and ABC. The tapes were later placed in a basement, where they are said to have sat for about 50 years unpublished. For several years, Tulchin attempted to interest broadcasters in the recordings with little success, though some of the footage of Nina Simone was eventually used in documentaries about the singer.

In 2004, Joe Lauro, a film archivist of Historic Films Archive, discovered the existence of the footage and contacted Hal Tulchin. He digitized and cataloged the footage, in the hope of working on a film about the event. In 2006, Lauro entered a deal with Robert Gordon and Morgan Neville to tell the story of the festival, but the deal never saw the light of day, due to Tulchin, who died in 2017, changing his requests and later refusing access to the footage. Producer Robert Fyvolent eventually acquired film and television rights to the footage from its original producer. Director Ahmir Thompson expressed surprise that the footage sat for so long, as music had a large impact on his life and development, stating “What would have happened if this was allowed a seat at the table? How much of a difference would that have made in my life? That was the moment that extinguished any doubt I had that I could do this.

Summer of Soul premiered on January 28, 2021, at the Sundance Film Festival, where it won the Grand Jury Prize and Audience Award in the US Documentary Competition. The film was acquired by Searchlight Pictures and Hulu. It was released in the United States at the El Capitan Theatre in Los Angeles and the AMC Magic Johnson Harlem 9 multiplex in New York City on June 25, 2021, before expanding nationwide a week later while also being released on Hulu, with the film also set to be distributed internationally in theaters and through Disney+ Hotstar on July 30, 2021, and Disney+ under the Star content hub and Star+ on November 19, 2021. It was made available on the US version of Disney+ on February 8, 2022, in time for Black History Month. It made its broadcast television premiere on ABC on February 20, 2022.

On April 22, 2021, it was announced that Questlove would introduce the first trailer for the film during the 93rd Academy Awards, for which he served as music director. The trailer debuted on April 25, 2021. In the United States, the film was made available on Disney+ on February 8, 2022.  On Rotten Tomatoes, the film holds an approval rating of 99% based on 206 reviews, with an average rating of 9.1/10. The website’s critics consensus reads: “Deftly interweaving incredible live footage with a series of revealing interviews, Summer of Soul captures the spirit and context of a watershed moment while tying it firmly to the present.”  I loved it!  Summer of Soul is streaming on Hulu, and Disney +. Check It Out!

An official soundtrack album was released on January 28, 2022, by Legacy Records. In an interview, Questlove said they considered including songs that weren’t in the original film they decided to stick with the music which was already cleared for release. The physical release contains 16 songs, while the digital release includes an extra song, Abbey Lincoln and Max Roach’s “Africa”.