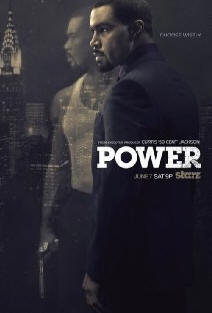 Power is a very intriguing story of a young Black male who is struggling to end his double life style. Ghost played by Omari Hardwick, is a Wealthy, successful Manhattan nightclub owner by night and a drug kingpin 24/7. Although he is suspected of being a drug dealer, it’s been hard for the FBI and police to pin him down, especially since his name, “Ghost” is renowned but no one has ever seen him, except his wife and a couple of friends. Before he is found out, Ghost who  goes under the name of James St. Patrick wants to dump his ghetto wife, Tasha St. Patrick (Naturi Naughton) and life style upon opening a new night club in California. In the mean while, unbeknownst to Ghost, he’s having an affair with (Lela Loran, played by Angela Valdes) the very FBI agent who has been trying to find out what Ghost looks like and make the bust.
This thriller is pretty entertaining and the acting is superb. The first season has come to an end with a fantastic finale.  Power airs on Showtime and is worth checking out!