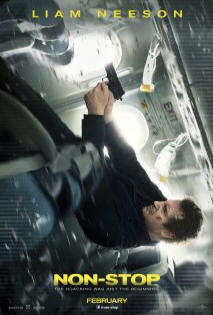 Liam Neeson is a great actor.  He is a very busy soul these days.  Non-Stop surprised me because I didn’t think it was going to be much of a movie.  However, I left the theater repeating over and over how much I enjoyed Non-Stop.  It was exciting, suspenseful, mysterious and had lots of action and drama.  It just about had everything you would want in a movie like this.  Well done Jaume Collet-Serra (Director).

Non-Stop is about a dried up, alcoholic, Federal Sky Marshall who along with a partner is responsible for the safety of all 150 passengers aboard a flight from New York City to London.  Things start to go badly when Bill Marks, played by Liam Neeson began to receive threatening text from an unknown passenger.  Because of Bill’s circumstances, no one really believed him.  It’s quite interesting to see how this one unfolds.  I was also delighted to see Lupita Nyong’o (12 Years a Slave) and Michelle Dockery (Downton Abbey) playing Stewardesses Gwen and Nancy, respectively.  I really liked Non-Stop and recommend it — It’s a real thrill ride.  You probably won’t guess who the culprit is, but it’s fun to try and play the guessing game.