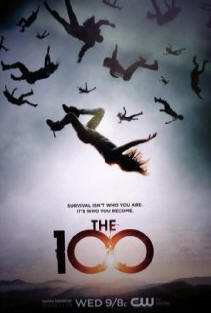 I really like this Sci-fi series, set 97 years after a nuclear war destroyed all humans on Earth. Fortunately, some humans escaped the annihilation on a spaceship that they now call home.  Unfortunately, the spaceship housing humanity’s lone survivors is running out of food, oxygen and a stable environment.  Because of the radiation levels, they believe Earth will not be inhabitable for another 100 years but because of their dire needs, they send 100 juvenile delinquents to Earth ahead of time in hopes of re-populating the planet.  In other words this faltering spaceship holds the last of mankind.  Because of the limitations on the ship, there are many restrictions in place.  If you are caught committing a crime which can be defined as having more than one baby or saving a life by giving the patient more than the regulated amount of blood or being in an area of the spaceship you’re not designated to be in, the penalty is death — no negotiations.  Instead of a president, they have a chancellor played by Isaiah Washington.

My only problem with The 100 is it’s aired on The CW which is one big advertising frenzy.  If you have a DVR, I would suggest you tape it first then bypass the commercials or you may lose your mind listening to the same ads over and over.  Unfortunately, if you watch it On Demand, you’ll have no choice but to suffer through the ads.  Aside from airing on the CW, The 100 is very good, interesting and well acted.  I think you will enjoy it and if you’re a Science Fiction fan, you’ll love it.  It certainly is better than The Leftovers.  Too bad it’s not on a premium cable network.