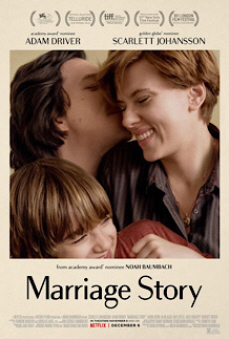 Marriage Story is a drama written, directed and produced by Noah Baumbach. The film follows a married couple going through a coast-to-coast divorce. Marriage Story is probably an unlikely scenario for divorce but not impossible.  I was annoyed by their situation because I was hoping for better but didn’t get it.

Charlie Barber (Adam Driver) is a successful theater director in New York City. His theater company is currently producing a play that stars his wife Nicole (Scarlett Johansson), a former teen film actress. The film delves into happier days when the couple only had good analogies to define each other.  They have a son Henry Barber (Azhy Robertson)  that they both adore.  Suddenly things begin to go sour initiated by Nicole. The couple begins to experience marital troubles, which sends them to see a mediator, who suggests that they each write down what they like about one another. Charlie writes his feelings but Nicole refuses to read hers aloud so they decide to forgo the counseling.

Meanwhile, Nicole is offered a starring role in a television pilot in Los Angeles, and she decides to leave the theater company and temporarily live with her mother Sandra (Julie Hagerty) in West Hollywood, taking the couple’s young son, Henry with her. Charlie decides to stay in New York, as the play is in the process of moving to Broadway. Despite the couple agreeing to split amicably and forgo lawyers, Nicole hires the family lawyer Nora (Laura Dern).  Nicole tells Nora the full story of her relationship with Charlie and how she gradually felt neglected by him and how he rejects her ideas and desires.

Because I’m a happy ending kind of gal, I’m always looking for one.  I truly dislike endings that leave me in tears or unknowing what happened or “make it up yourself”, resulting in open-ended closures.  Marriage Story gave me semi-quasi closure but not the one I was hoping for.  Driver and Johanssen are two of the best actors around and played Nicole and Charlie excellently.  In some parts, the movie was a tad bit boring but was interesting for the most part.  I didn’t really care for their son’s attitude but I think it’s a cultural thing.  I’m not sure what message Marriage Story sends but it was well-acted.  An awful lot of people really liked it and that’s what counts.  Since Marriage Story is airing on Netflix, it’s easy to see it at your leisure, just remember the Oscars are presented on February 9th this year, so you don’t have that much time if you follow the award shows.  Check It Out!