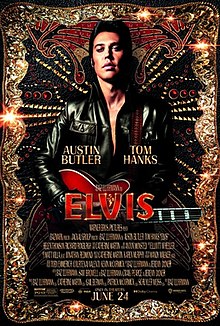 Elvis is a biographical musical film directed by Baz Luhrmann, who co-wrote the screenplay with Sam Bromell, Craig Pearce, and Jeremy Doner. The film follows the life of rock and roll icon, singer/ actor Elvis Presley told from the perspective of his manager, Colonel Tom Parker. Out of all the Elvis movies I’ve seen advertised, this version sparked my eye because the person playing Elvis is a dead ringer and of course, a believable, well know actor is co-starring. I thought the movie was entertaining and extremely well done.

The film opens in 1997 with Elvis Presley’s (Austin Butler) former manager, Colonel Tom Parker (Tom Hanks), on his deathbed. Nursing a gambling addiction that has left him destitute, he looks back on how he first met the future King of Rock and Roll.

Elvis was very close to his parents, Vernon (Richard Roxburgh) and Gladys (Helen Thomson) Presley.  The family was dirt poor and when Vernon experienced an 8-month jail term for doctoring a check, they moved to one of the poorest parts of Mississippi. There Elvis finds an escape in comic books and especially in ethnic songs since he attended the local African-American church. Once he moves with his parents to Memphis, he is urged by his friends to pursue his fascination with the African-American music of Memphis’ Beale Street. At this time, Parker is a carnival “huckster” who fancies himself a modern-day P.T. Barnum. Although Parker is already managing country singer Hank Snow (David Wenham), Parker immediately realizes Elvis’ crossover potential when he hears the white artist “singing black” on a low-quality single. He tracks Elvis to a Louisiana Hayride performance, finding that he is a talented musician with a strong sexual appeal.

Parker persuades Elvis to let him take exclusive control of his career, beginning a meteoric ascent that sees the Presley family lifted out of poverty. Here begins a riveting history of Elvis Presley, his music, family, and his manager. In my opinion, I think a good job was done by all.  I grew up with Elvis Presley, buying his records, listening to his music, and watching his movies.  I even marched down the aisle to “Blue Hawaii” at my wedding.  You might say I’m a little biased but I wouldn’t approve of an Elvis biopic if it were not fact-checked.  This Elvis film dismissed the many rumors I grew up with about what Elvis Presley had to say about Black people.  I really never believed the rumors but always wondered.  After seeing Elvis, all rumors are finally debunked.

As of July 17, 2022, Elvis has grossed $106.6 million in the United States and Canada, and $79.6 million in other territories, for a worldwide total of $186.2 million. On the review aggregator website Rotten Tomatoes, 78% of 334 critics’ reviews are positive, with an average rating of 6.8/10. The website’s consensus reads, “The standard rock biopic formula gets all shook up in Elvis, with Baz Luhrmann’s dazzling energy and style perfectly complemented by Austin Butler’s outstanding lead performance.” Elvis is currently playing in theaters — Check It Out!

FYI:  Elvis’s daughter Lisa Marie Presley, ex-wife Priscilla Presley, and granddaughter Riley Keough all praised the film, particularly Butler’s performance and Luhrmann’s direction. Prior to its world premiere at the Cannes Film Festival, Lisa Marie also praised the film in an Instagram post after seeing it twice, calling it “nothing short of spectacular and in my humble opinion, Butler’s performance is unprecedented and FINALLY done accurately and respectfully”.