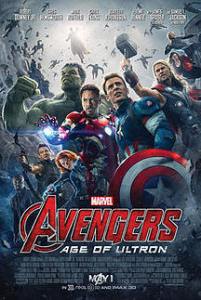 Wow! What a roller coaster ride. The gangs all back in full force. They have brought along their woes and brainstorms too. Tony Stark/Iron Man (Robert Downing, Jr.) and Bruce Banner/Hulk (Mark Ruffalo) lock minds to perfect peaceful software into man’s dream of a safe and peaceful environment from aliens and bad humans, alike. Of course the whole thing backfires making Age of Ultron one of the most profitable films of the Avenger series. Ultron gets a body as well as a voice (James Spader) plus endless power to fight and destroy all Tony and Bruce has worked for, including the ever so faithful, J.A.R.V.I.S. After all is said and done, two new super powers are created. One reasonably good and one pure evil, bent on destroying all of mankind. We learn in this sequel, Natasha Romanoff/Black Widow (Scarlett Johannson) and The Hulk are attracted to one another but for obvious reasons, he is reluctant to persue a relationship.
It all started when the team encountered the twins, Quicksilver (Aaron Taylor-Johnson) and Scarlet Witch (Elizabeth Olsen) aka, Pietro and Wanda Maximoff, respectively. They have been experimented on by Wolfgang Von Stucker at a Hydra outpost. Pietro has superhuman speed and Wanda can manipulate minds and project energy. From this encounter, Stark and Banner discover an artificial intelligence (AI) inside the scepter gem they recovered and used it to complete Ultron, Stark’s secret Global Defense Program. Once completed, Ultron destroys J.A.R.V.I.S., Stark’s current AI and attacks the Avengers, believing in order to save Earth, all mankind must be eliminated. Ultron continues to reek havoc, creating himself a body, building an army of robot drones and destroying people and cities. The twins started off as allies of Ultron but learn of his plans to destroy all mankind and quickly switched sides. Many agents of Shield, as well as Nick Fury (Samuel L. Jackson), Heimdall (Idris Elba) and Agent Carter (Hayley Atwell), make appearances. If you seek action, you’ve come to the right flick. You’ll be on the edge of your seat right up until the very end, common with the Avenger series. James Spader really does a fantastic job as the voice of Ultron. The special effects are spot-on and the story is decent. I understand there’s going to be two more sequels: Infinity War, Part 1 to be released May 4th, 2018 and Part 2, May 3rd, 2019.  James Brolin is expected to play Thanos, who was introduced briefly in this sequel. If you see Avengers: Age of Ultron, make sure you stay for the credits.